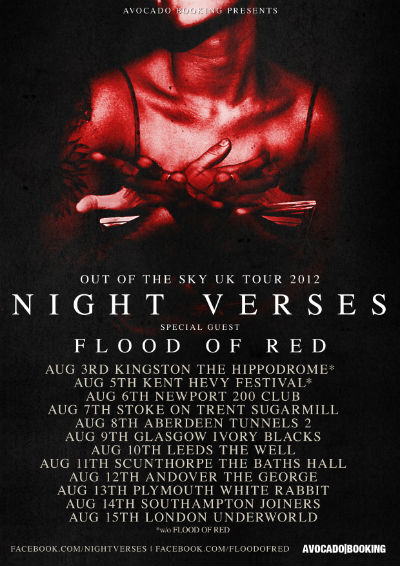 “We’ve officially announced the ‘Out of the Sky’ UK Tour. This will be our first tour ever as a unit and to kick it off on the main stage at Hevy Festival is far beyond anything we ever expected. To even imagine headlining our first tour in another country other than our own is just an incredibly surreal feeling. We’ve also asked our friends in Flood of Red to join us on the tour. They’re an excellent band comprised of great people and we’re very pleased to have them. Check the dates listed and start telling everyone you know because we can promise you that this first tour will be one not to miss. There is an energy inside of us and it’s time to release it to the world.” – Night Verses

Night Verses’ debut EP ‘Out Of The Sky’, produced by Portland-based Kris Crummett, is available now for free download from www.nightverses.com. The band are also set to unveil their first ever music video within the next few weeks and you can check out a sneak preview for ‘Be Happy With Yourself, I’m Staying Here In Hell’ above.

The instrumental foundation of the band have been playing together for over seven years with former vocalist of The Sleeping, Doug Robinson, joining the troupe only recently. Drummer Aric says of the process “Nick, Reilly and I literally went years without any sign of a singer capable of achieving what we all thought was needed to complete our sound. Despite this, we continued to write 5 nights a week, being motivated solely by our progression as musicians and the hope of finding that final member. It wasn’t until we came in contact with Douglas that we felt like we met someone else who was as willing to push themselves musically and as creatively as we do.”