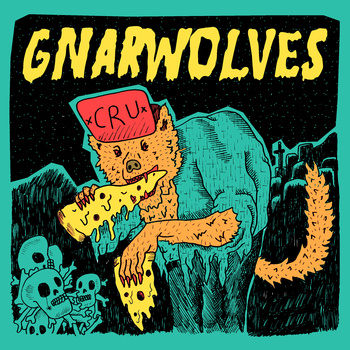 Forming in December 2011, Gnarwolves have come a long way in a short amount of time. Off the back of their debut release ‘Fun Club’, Gnarwolves cast their mark in the UK punk scene and things are set to get a lot bigger for them. Just off their UK tour with As We Sink, plus support slots with The Wonder Years, Bridge And Tunnel and Spraynard already under their belt, a huge touring schedule booked and a summer 7” release; 2o12 is set to be a huge a year for Gnarwolves. The first track off their debut album ‘History is Bunk’ has been in heavy rotation on the Internet already, with their DIY routes coming through on the homemade video. With a massive party attitude their live show is energetic, loud, full of emotion and not to be missed. Catch them before they get huge.

“Party Punk Rock for all the right reasons” – BIG CHEESE

“Hailing from Cornwall, but based in Brighton, the fantastically monikered Gnarwolves make passionate, speedy pop punk. Harking back to an era when skateboarding and punk were in the midst of their sordid love affair, it’s nostalgic and rousing” – PINK MIST

“Make sure you get familiar and get out and see Gnarwolves doing the rounds now, because with a year or two of hard work…you’ll be seeing them in much bigger venues and on much bigger bills” – PUNKTASTIC

“Your new favourite band…gruff punk better than most…it just makes you want to get boozy and sing along.” – MOVING NORTH

“A lesson to all who want to make melodic tunes with bite.” – THIS THING CALLED PROGRESS

You can watch the video for ‘History Is Bunk’ streaming below. This is the first track taken from the new Gnarwolves record- CRU which is out now on Tangled Talk/ Day By Day Record. (7″ Now Sold Out on Tangled Talk)

Gnarwolves released their 7″ July 16th which was a co-release between Tangled Talk Records and Day By Day records.  Six tracks of gruff pop-punk from the best new band in the country. This is a co-release with  Day By Day Records, limited to 500 copies (black, orange and limited ‘snot’ colour variations). Vinyl will begin shipping in August.

The 6 track EP is streaming below via Tangled Talks Bandcamp page.

UP AND COMING GIGS