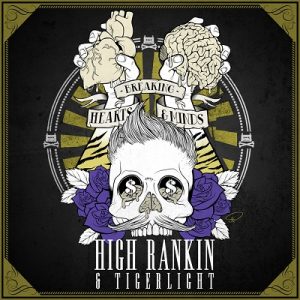 Known for his huge productions, epic remixes of Snoop Dogg and Professor Green to name just two, along with poking fun at the dance music scene for years, Suicide Dub heartthrob High Rankin has joined forces with vocalist and co-writer Tigerlight, whose vocal skills have graced the stage backing up UK’s Xfactor Artists including Beyonce, Will.I.Am and Christina Aguilera.

The duo have worked on four brand new, bass driven tracks destined to smash a dance floor near you this summer. Leading with the synth stabbing, high flyer ‘Save Yourself the Pain’, ‘Breaking Hearts and Minds’ takes you on a journey of floor stomping and stomach bouncing wob in ‘I Make Bass’ and also features the menacing presence of ‘Hundred Miles High’ fueled by the grinding vocal delivery of Murkage Dave.

End track ‘Day To Die’ is the “most haunting track on the EP”, according to Rankin. “Addressing perhaps the final taboo, death.” The duo decided to put the fear of that moment into their promo video in a claustrophobic three-and-a-half-minute format piece. The feeling of impending doom lies heavy and the scenes of brutality are by no means anyone ideas of fun. Tigerlight plays a mystical character of a guardian trying to warn High Rankin of the imminent attack and eventually saving him from the impending beating.

High Rankin & Tigerlight now have a full live band to accompany their stunning releases. Their live show is now firing on all cylinders with a 5 piece line up of vocals, drums, guitars, synths and MPC action. Expect some serious bass, huge drum work and on-stage antics that makes High Rankin the big bellend that we all know and love.

See them play live at London’s Koko venue in Camden, London on Saturday 14th July alongside Datsik and Modestep.

Pre-order the ‘Breaking Hearts and Minds’ EP on i-Tunes from http://tinyurl.com/cyuas67