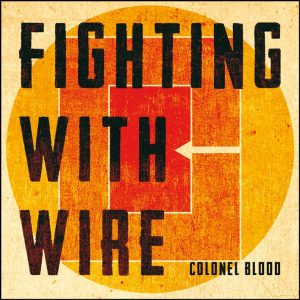 Northern Ireland’s Fighting With Wire is gearing up for the release of their sophomore album, Colonel Blood, due out September 25 on Xtra Mile Recordings/ILG. In anticipation of the release, the band has revealed the first single, “Waiting On A Way To Believe,” a direct and fast-paced anthem with driving rock riffs and instantly memorable melodies.

Colonel Blood is the follow-up to their critically-acclaimed 2008 debut Man Vs Monster which earned the Derry-based trio international recognition. BBC Radio 1‘s Zane Lowe proclaimed it “absolutely phenomenal from the start to the end, a flawless modern rock record,” while Absolutepunk.net declared it “a bona fide homerun…they are poised to make a huge splash with their aggressive but relentlessly propulsive brand of rock, filling a long-empty void in the musical landscape.”

Recorded in Nashville with producer Nick Raskulinecz (Deftones, Foo Fighters, Danzig), the 11-song set is a straight-up rock record that delivers belting riffs, brutal rhythmic attacks and sing-along choruses. Lead guitarist and vocalist Cahir O’Doherty explains, “With this new record we really focused on the songs, we’re all influenced by early 90’s American rock so making this record we tried to give that 90’s sound a modern makeover. It was great working with Nick Raskulinecz in Nashville, he really got what we were trying to do and helped us make this record sound huge.”

Born from a passion for music and a strong DIY ethic, U.K.-based Xtra Mile Recordings started in 2003 to release albums by post-hardcore band Million Dead and rock outfit Reuben.  After receiving critical acclaim for both albums, the label slowly began to grow and year on year the roster expanded, playing host to an eclectic array of emerging and established acts, that include Frank Turner, The Xcerts, Crazy Arm, Far, I Am The Avalanche, Against Me!, Future Of The Left, Dave Hause, Jim Lockey & The Solemn Sun, Fighting Fiction and Straight Lines plus many more.

mewithoutYou Release New Song “Julia (or, ‘Holy to the LORD’ on the Bells of Horses”