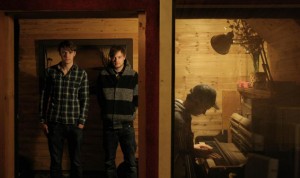 We previously introduced you to the talents of Dark Dark Horse. Producer Jamie Ward- whose name may already be familiar due to his work in band Kyte and current regularly featured band Maybeshewill- has poured his efforts alongside singer James Stafford- Kids In Cars- to create easy listening experimental electronica with elation.

Hailing from Leicestershire; the duo bring more energy to their live performances as they are joined by musicians Joe Norledge and Robin Southby, all of which maintaining they’re musicianship.
Dark Dark Horse excel on their workmanship during song writing with Jamie initially writing the music and James turning those electronic doodles into fully formed songs.
Following their early demos being uploaded; it wasn’t long before they’re compositions scoured the globe. With ever gaining popularity for the band, the first label to take a shine to Dark Dark Horse happened to be based 5000 miles away from their Leicestershire roots. However joining forces with label Rallye (Toro Y Moi, Au Reviour Simone, The Joy Formidable) saw the release of their album “Centuries”. Their debut album became available for all in November of last year and now the band are setting their sites on their home land.
As their success continues the band are gaining day time national radio play, this has led to the support of BBC 6 Music’s Tom Robinson who was simply impressed by their capabilities. Following an interview with Tom in a twist of fate Dark Dark Horse was given odds to win the Mercury Prize by Ladbrokes.com.
Dark Dark Horse have unveiled an absolutely stunning acoustic version of their track ‘Midnight Mass’ which is taken from their debut record ‘Centuries’.
Listen to the chilling rendition and lovely warm video streaming below-

Trails release new single ‘Is My Purple Your Purple?’ – Out Now