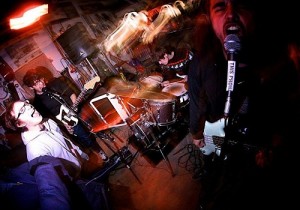 Trust Fall the Virginia Beach Trio are a familiar name on the site following features on the progression of the band. Trust Fall in the last year have followed success to become a signed band on a favourite label Flannel Gurl Records and teased us all with ongoing projects and fantastic independent and strong releases. Trust Fall consist of John, Ryan and Rusty and frankly we really do admire this promising act. After keeping in good contact with the band and reporting all Trust Fall related news we are privileged to finally get more intimate with the band- as we interview the three regarding their inspirations, aspirations, involvement with Flannel Gurl  and lots more.

Firstly thank you so much for spending some time with Circuit Sweet.

Thank you for your continued interest!

Before we get to the details of the new combined force between Trust Fall and Flannel Gurl Records, although you’ve been featured on the site throughout the last year in certain articles- we’ve been desperate to have more Trust Fall plastered on the site so to start off with we’d like you to introduce yourselves to our readers. We want to get to know more on each of you. How long have you been playing and performing live?

John: Hello! My name is John, and I play guitar/make dumb jokes in Trust Fall. I have been playing for about six years and live for about a year and a half.

Rusty: My name is Rusty and I play the drums and top-down shooters and 2-d fighters and I’ve been playing music for nine years, and drums for about five. Live for about eight years.

How did Trust Fall form and where did the name come from?

Well we’ve all known each other for a really long time, but it just worked out that this project started just about a year ago. Ryan and John wrote the first three songs, along with a few others that we scrapped, on an acoustic in Ryan’s room night after night. Ryan came up with the name. After we had a few songs developed, we asked our dearest friend Rusty if he would like to drum, and he enthusiastically agreed.

What outside influences trigger your creativity and create your unique sound?

John:  Most of the lyrics I write are influenced by people I know, some of who are/were very close, and I hesitate to go any further than that.  Musically, I try and draw from bands outside the genre. Like, Dinosaur Jr. is my favorite band, and I grew up on R.E.M. so Peter Buck’s arpeggiated style is pretty ingrained. And bands like Sleepytime Trio, Owltian Mia (also from Virginia Beach), Lync, Sonic Youth and Cap’n Jazz. Beer is an influence, too.

Ryan: Well vocally I essentially learned by singing along to Against Me! records alone in my room, but lyrically John and I write the back and forth, so they end up a combination of the way we both think.  Musically I just do what I can to hold the songs together between Rusty and John just going nuts in the foreground.

How would you describe your sound/compositions?

Somewhere between math and recess.

Earlier this year you released the EP ‘My Thoughts Exactly’ personally I see this as a vital milestone for you, describe the recording process of the record, the influences and what its meant to you personally

We decided to tune up the songs we had on our demo and add another and an intro as a representation of where our sound was/is going.  The original songs were much more rooted in a noodley emo sound, but with ‘Wormholes and Semantics’ and our intro, we were trying to move in a more dynamic sound that drew from more post-hardcore bands. 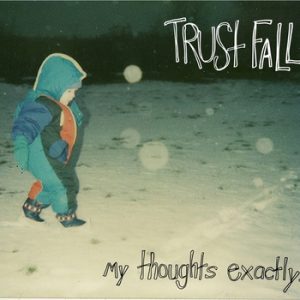 Would you do anything differently if you could redo the whole process again?

Take our time, and not spend only two days on it. We kind of rushed it out so it’d be ready for tour.

What was the response of the release?

Overall it was a fairly positive reception. It definitely helped get a bit of attention, and we’ve toured behind it and played behind it a bunch, but we’re really excited to tour with the new songs we have written.

With regards to your ongoing project ‘On aquidneck island’ where has the inspiration behind this come from and what would you like to achieve with this project?

Oh man, we really need to add things to that release. John came up with the idea because we spent most of our time spread out across the state, and Blacksburg, Va is super boring in the winter. We wanted a medium where we could compile acoustic songs, live recordings, and the like.

As an artist what are your aspirations you’d like to achieve with your talent?

John: Oh gash. Hmm, I just want to have moments when someone is listening to go, ‘oh, that was an interesting chord/progression/line, I wonder what made him choose that?’ Pretty much any little thing that will make somebody dig a little deeper into the song.

Rusty: I’d like to be better at drawing cartoons. I look at everything I make as ‘it could be done better.’ I would love to be on the level   where I’m content with what I’ve made.

Ryan: If I can create something that somebody, somewhere, can take comfort in, I’ll be happy.

For those unaware Flannel Gurl Records are a great DIY label with a lot of love and even more talented artists. Flannel Gurl was started in 2010 by Jonathan and Kimmi to record and release music created by artists in Southwest, VA and beyond. To this day they are one of the most underrated labels but also one of the best. So How did the signing with Flannel Gurl Records come about?

John has known Jonathan and Kimmi Ashwell for about a year and a half, and had become good friends with them in that time. Around November of last year, they approached us and basically said ‘we really like what you’re doing, and we’d like to work with you guys and want to help support your endeavor and release a 7”.’ So we high-fived and that was the beginning of our artist-label relationship.

I presume you’ve had many offers/ interest to your talent and releases before but why is Flannel Gurl the right home for you?

It’s a relationship that is very organic in nature. They are two people we feel very comfortable with, genuinely love as people, and we respect their uncompromising ethics.

What do you believe is the best thing about being a DIY band on a notorious DIY label?

We feel like Flannel Gurl is making a great contribution to the DIY scene in terms of the bands they’re supporting and their dedication to keeping their label DIY. We’re really excited to be a part of a label that is so positive and has so many great bands on it.

Since the amalgamation of the label and the band, we announced the proposed release of the 7″ single.  what plans are currently being set in stone and what’s the next step after this release with Flannel Gurl by your side?

First off, we really really appreciate that announcement. It was mind-blowing that people actually cared about our signing. As far as plans go, we’ve got our summer tour, which starts towards the end of July and will run for almost three weeks. The 7” should be out by the I Got Brains! Fest in Blacksburg, which is the last stop on tour. After that, we’ll do mostly shows around the state and promote the 7”, followed by another tour in the winter.

I Understand you’ve just finished the second song to accompany the 7″ release, can you give us an exclusive insight into what we can look forward to?

More intensity. Noodley guitar lines will be used more sparingly. John does the vocals for the first half of one song.  Ryan wrote a catchy vocal melody for the chorus of one song. We’ve taken our time to work out the songs to make sure it sounds focused and not rushed sounding like our EP. And the 7” is called ‘work hard, play weird, stay kvlt.’

For those of us this side of the pond who would love to see you guys perform live; what do your live performances possess? And what live ventures have you got in the pipeline?

We like to flail around a lot. Playing live is equal parts catharsis and fun for us. We also make dumb jokes. As previously stated, we’ve got our summer tour, tentatively titled ‘trust fall’s wet hot american summer, everybody must play caterpillars with john and rusty while ryan talks to his girl lady, i’m pregnant alien baby, shop smart shop s-mart, livin’ the dream, work hard, play weird, stay kvlt summer tour 2012,’ which we are really excited about.

What can we look forward to from yourselves in the next year and beyond?

Hopefully we can do a split with a rad band that we genuinely love. We’re definitely doing a full length in the future, and we’d like to take that on sometime in the next year.

All featured artists are asked this- What album or track has been stuck on your turntable, ipod, cd player for a while now?

And finally any Last words from you all?

Ryan: Do what you can to support the scene. And listen to CityCop.

Rusty: Everyday, once a day, give yourself a present.

John: Be your own bird! 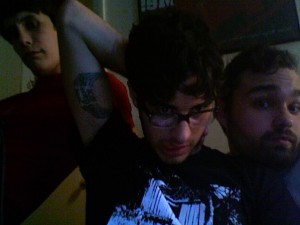 Again we want to thank Trust Fall for their time with us. A true DIY band living up to it’s roots. Trust Fall are bursting with potential and are a name you will hear a lot more of. We urge you to visit their bandcamp and download your free download’s of their EP, demo and single. These three musicians have come a long way together- and their unity as a band, their workmanship and creativity radiates their aptitude. To get noticed by Flannel Gurl Records certainly was the next step for the development of the trio. Trust Fall’s passion and love for what they do is clear within their orchestrations- a talent worth supporting.