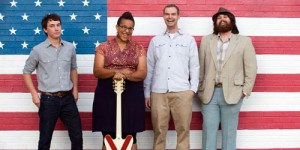 Following a string of sold out European dates and a US tour supporting Jack White earlier this year, Alabama Shakes have announced that they will be doing a full European tour this November, which will include their two biggest headline shows to date at London’s Coronet and The Forum. The two London dates have now sold out but a full list of dates can be found below.

The band are set to release their new single ‘Hang Loose’ – the follow-up to ‘Hold On’ – will be released on 23rd July. The track is taken from their debut album Boys & Girls, which charted at number 3 in the UK. The entire album can be found streaming below-

Earlier this year we had the honour in seeing Alabama Shakes perform live at their sold out Birmingham performance. You can see our live review here- https://circuitsweet.co.uk/2012/05/alabama-shakes-birmingham-hmv-institute/

Into it. Over it. “Connecticut Steps” Punks in Vegas Stripped Down Session