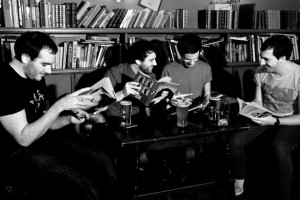 Wot Gorilla? are pleased to present their video for ‘Snow White’ taken from their upcoming debut album ‘Kebnekaise’ due for release this August.

Hailing from Halifax, England, Wot Gorilla? combine elements of math, pop and progressive rock with heavy melodic breakdowns seamlessly in a genre-bending spectacle that has to be heard to be believed.

With their name originating from a track on the 1976 Genesis album ‘Wind & Wuthering’, the four piece band take cues from progressive pop and rock from then and now – but firmly rooted in the latter.

Further thanks must be expressed to Emma Pickles – check her channel out here – http://www.youtube.com/user/EuphoricCreation

The band is known for their technical performances, taking the audience on an unpredictable and energetic journey. A focal point of the bands style is their highly complex song structures, bizarre time signatures and Haigh’s distinctive vocals. The band have shared stages with the likes of Tubelord, Tera Melos, Cursive and The Get Up Kids as well as various festivals around the UK including slots at Reading and Leeds festival.

So whatever you do this summer, be sure to take in the subtle harmonies and enigmatic percussion of Wot Gorilla?, they just might be the soundtrack to your holidays.