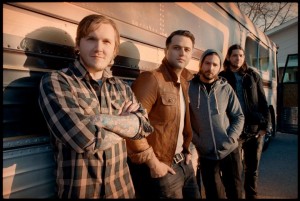 The Gaslight Anthem are excited to announce a run of UK tour dates this Autumn. The shows are the first in support of their highly anticipated fourth album, “Handwritten”, out July 23rd on Mercury Records.

The Gaslight Anthem have already performed at several major festival appearances this Summer including opening for Bon Jovi at Bamboozle in East Rutherford, NJ (May 20th); appearing at the Metallica Orion Festival in Atlantic City, NJ (June 23rd) and Lollapalooza (for the second time) at Grant Park in Chicago (August 5th). Recent European dates included shows with Soundgarden in Paris, Berlin and Milan and several major festivals. The band will also return to the UK later this summer to appear on the main stage at this years Reading and Leeds Festivals.

The Gaslight Anthem have also announced their new fan club – The 45 PRM Club. The membership (at the low price of $25 per year) will allow members to purchase any 45 Fan Club pre sale tickets for shows as well as various awesome bits of merchandise and vinyl only available through the club. The band said: “We decided to create a place where our fans could talk to other fans, share live recordings, photos, and their thoughts. We also wanted to make a place where we could give something extra back to the people who’ve supported us through the years, help cut down on scalpers, and make sure real fans get the tickets they want. It’s also a place to get some cool extras every year from us just to say thanks for being there with us through the ride.”

In other exciting news, on June 28th, The Gaslight Anthem will appear (for the third time!) on CBS’s The Late Show with David Letterman! The band will also perform on Late Night with Jimmy Fallon (for the secondtime) on July 27th ( no relation to Brian Fallon!). The band will also be filming a new video for theirforthcoming single, ‘Handwritten’ in New York City on June 25th.

The full track listing for ‘Handwritten’:

PET DEATHS share video for ‘Wind Up Bird’, announce new album “to the top of the hill and roll…” due 30th August via Silver Mind Records