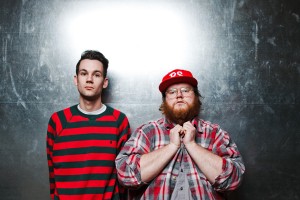 Ontario’s PS I Love You are set to follow-up their Polaris Music Prize long-listed debut album with their second long-player Death Dreams.

To the casual on-looker, PS I Love You’s quick rise to the summit of the intensely competitive Canadian music landscape is the thing dreams are made of. Heck – just over one year ago the band released their highly praised homage to their hometown Kingston, Ontario. Meet Me At The Muster Station was embraced by critics across the globe garnering consistently dazzling reviews. As a result PS I Love You’s Benjamin Nelson and Paul Saulnier began to tour Muster Station around the planet.

While on the road Paul Saulnier began to have reoccurring dreams centered around, as dark as it may sound, his mortality. Triggered by life on the road – these images, created by Saulnier’s subconscious have, shaped the direction of the band’s brilliant new LP Death Dreams.

Death Dreams was recorded with Muster Station producer Matt Rogalsky on his portable studio in the band’s tiny rehearsal space. No big budget studios for these lads. The album’s photography and design of the album’s artwork was created and executed by Benjamin Nelson.

Paper Bag Records is one of North America’s finest independent record labels. Based in Toronto, Paper Bag Records has cultivated an exciting and diverse roster which includes both domestic and international talent. Most recently, the label became the Canadian home for operatic electronic act Austra, the enthralling Rural Alberta Advantage as well as long-standing purveyors of countrified rock Cuff The Duke and Elliott BROOD. In 2011 the label had a staggering four albums included on the Polaris Music Prize long list and has started 2012 with four Juno Award nominations. In its tenth year of existence, Paper Bag Records is currently working with an exciting active roster of PS I Love You, Young Galaxy, Born Ruffians, The Acorn, Winter Gloves, Woodhands, Slim Twig, CFCF and Sally Shapiro. The label has also had the pleasure of furthering the careers of You Say Party, Tokyo Police Club, Broken Social Scene and Stars in the past.