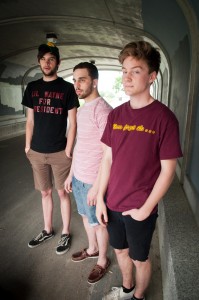 Daily we receive dozens of music submissions and eventually when we manage our time we get to introduce ourselves with fantastic new music. However at the end of last month we received an email which not only bought the biggest smile to our faces but we familiarized ourselves with what we stated one of the best releases of this year alone and one of the best music submissions we’ve had. This talented act caught our eye. Introducing math rock experimental trio Willow consisting of musicians Jared Mann, Seth Chapdelaine and Trevor White. The band hail from Providence, Rhode Island and are thriving in the scene- connected to Blanketfort Records which is a collective of musicians who are doing wonders for the DIY industry. They self-release, record, and promote all of their music, and have released several albums and EPs. In May of this year the trio released their first EP titled ‘The Roanoke‘. The band possess a powerful DIY spirit which shows in their strong release. Their debut EP was recorded by the trio who do all of the recording themselves be that in bedrooms or basements- but when you listen to how perpetual the quality of the release is throughout you would never know. The Roanoke EP was constructed within just four-five months, and not only are the trio eager to introduce their talents to more but the band have also just dropped another dynamic EP titled ‘The Melancholy EP‘. We jumped at the chance to feature such a vivacious young and inspiring act. We were delighted to speak to the three to find out more about their goals, passions and their newest releases. Below is their introducing feature and exclusive interview with their first UK site, we urge you to listen to both releases streaming on the page. 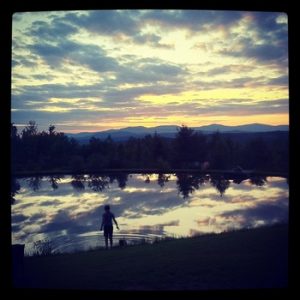 Released 16th May 2012, Willow unveiled a flawless release and an impressive debut. This compelling release provides contrast withing this math rock genre. Individually the three musicians each bring their own creative competency to culminate exceptional compositions. Each high energy track  which makes up the EP should be credited on its structure and format.  Each orchestration offers an addictive impression. Tracks you’ll need to hear more of; a long lasting perfect and illustrious experimental creation.

Streaming in its entirety below you can download a copy for yourselves now at a name your price option.

The Roanoke will be featured again in Circuit Sweet’s massive end of year feature Rad Releases as one of our favourite releases this year! These three talented and hardworking musicians are putting their all into Willow and it’s paying off. We had the pleasure in speaking with Jared, Seth and Trevor.

Before we get to the details of your two newly released flawless EP’s, we want to get to know more on you- Firstly introduce yourselves, How long have you each been playing and performing live?

-Trevor (bass): I played guitar in the band Bad Art with Jared for about 2 years. Willow started after our previous band Walri, which we were all in with a second guitar player. We played one show before we broke up.

-Seth (guitar): I played in a couple math bands, Summit, and Blackbear ( which i was in with Jared too), and also Walri, where I hooked up with Trevor.

-Jared (drums): I played guitar mainly in a bunch of bands, namely Big Tall Buildings and Blackbear, before I started playing drums with Walri which led to Bad Art and now Willow.

How did you all meet and whats the story being the formation of willow?

-We all played together in Walri until our other guitar player kinda went nuts, stole $1200 of rent money, and fell off the face of the earth. We still haven’t even seen him in a year. Anyways, we were all pretty good friends that played music and lived in the same town, so it was inevitable that we’d collaborate.

What outside influences trigger your creativity and create your unique sound?

How would you personally decribe your own sound?

-Seth and I (Trevor) were in a guitar store a few months ago, and Seth was playing one of our songs on a guitar, and this old blues dude came up and asked if we played in a band, like “Damn, man, what’s the name of yo band?”, and so Seth told him “Willow”, and he said, “Damn, that sounds like Willow”. That’s the best way to describe it I guess.

Describe your writing process together and how you’ve managed to get to the point of your debut EP release.

-Jamming, and playing a lot together. Just putting crazy different parts together into one song pretty much. Seth writes a lot of different riffs, and he brings them to us and we all work them out and reorganize them into something of a finished product. The songs on the EP are all really old, from the fall of 2011, and we figured we’d have to put them out sometime. We finally got around to releasing them. We almost didn’t put it out just because we were always writing new things that we were more excited about.

In May of this year you released the EP ‘The Roanoke’ which I’ve already mentioned to the band as being withoutadoubt one of the best releases of this year and certainly one of our favourite music submissions to date, describe the recording process of the record, the influences and what its meant to you personally.

-Lots of hardwork. Seth works a full time job, and Jared and I were still full time students at Rhode Island College, so we all had to figure out our schedules and when we could jam and record. So basically over five months from September to January we used whatever we could get our hands on, as far as recording equipment goes, to put the album together. We recorded it mainly in Jared’s basement, which was cramped, cold, and suffocating cause of our kerosene heater…so we were all high on fumes…not really, but it was pretty shitty. We’re glad we finally got it out, but we’re more focused on what’s to come.

Following on from its release which is a learning curve to many. Would you do anything differently if you could redo the whole process again?

-Maybe get a better heater. More sweaters. But really it came out the way it did cause of the learning curve.

How have you found the response of the release?

-So far so good. Not many people know too much about us, but we’ve maxed out our downloads on Bandcamp, and everybody that listens to us seems to be pretty excited about it, come to the show, and support us a lot. We’ve also played with some decent bands we respect like A Great Big Pile of Leaves from Brooklyn and Algernon Cadwallader from Philly.

As an artist what are your aspirations you’d like to achieve with your talent?

-Make a new sound and new noise that no ones ever heard before. Cause as far as we’re concerned, music is in a state of repetition right now.

So you are involved with Blanketfort Records which we are desperate to know more about. How did that platform arise?

-We run the label and release the music of our friends and people we collaborate with. All the money comes out of our own pockets. We put this music out because we care about it.

Since the amalgamation of the label and the band, what can we look forward to with blanketfort records by your side? And how has the unity affected the band so far? – More Info On Blanketfort Records here.

-Some random side projects and Bad Art is still scheduled to release ‘Hullabaloo’.

We Love DIY. You are a positive influential DIY act holding on to your DIY mentalities. But what do you believe is the best thing about being a DIY band on DIY label and why is it so important?

-We have control and do whatever we want to do with our music. No one’s breathing down our necks telling us what to do or how to do it, so it’s a lot of freedom. And we all really like recording our own music. We’re all learning a lot by doing this, and we’re growing as a band because of it. We have a while to go because we’re all decently young.

For those of us this side of the pond who would love to see you guys perform live; how do you project your EP live what do your live performances posses? And what live ventures have you got in the pipeline?

-There’s a lot of energy. People get into it because we don’t have many vocals, so people are forced to feel on their own without having any lyrics to tell them what to feel.

Would you consider a UK tour?

What can we look forward to from yourself in the next year?

-Touring. More than one release.

All featured artists are asked this- What album or track has been stuck on your turntable, ipod, cd player for a while now?

And finally any Last words

-Thanks for the interview and all the kind words. Maybe we’ll see you soon in England. ;)- You’ve got a place to stay and an open invitation if it means we get to see you live.

A month on from the successful release of their debut -it seems the band’s creativity shows no signs of slowing as previously mentioned June 22nd saw the three release their second EP and follow up ‘The Melancholy’.  Notably the release was recorded in just 3 quick sessions over 2 weeks. As well as streaming on bandcamp you can also listen to the release streaming via soundcloud and available as a name your price release. 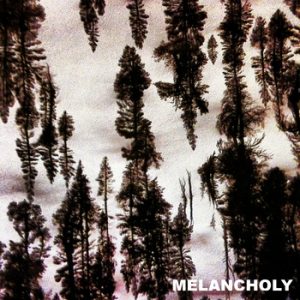 Willow are now working on their first full length release which we look forward to hearing. The band have the world at their feet-  with such relentless passion keeping the three motivated it’s no wonder their compositions are reaching afar. Now planning an East Coast US tour this fall this isn’t the last you will hear of Willow on the site.

Again we thank the three for their involvement.