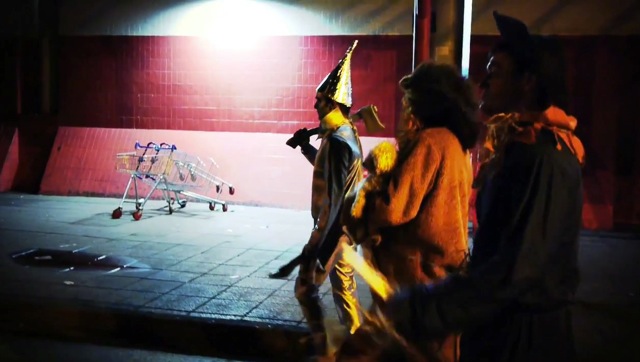 The Grand Gestures are the brainchild of Spare Snare’s Jan Burnett who has called upon various vocalists to collaborate on his 8 track LP. Jan sent them the music, the vocalists then visited his home and recorded their vocals in his bathroom, he then served them a curry lunch, two of the albums’s contributors take up the story….

“Being invited to take part in The Grand Gestures has been a lovely way to catch up with my old friend Jan Burnett from Spare Snare, make new friends, sing a beautiful song in a bathroom (swapping the hairbrush for a real microphone) and eat the perfect curry lunch. I didn’t eat the curry in the bathroom. That would be unhygienic.”
Emma Pollock, Burns Unit / Delgados / Chemikal Underground Records.

To coincide with the album’s release and it’s one-off headline show tomorrow at Glasgow’s King Tuts, a short film for ‘The Silver Shoes’ has been made by The Mitcham Submarine in collaboration with Black Revolver Films, to help visualise Jill O’Sullivan from Sparrow and the Workshop’s track ‘There’s No Place Like Home’. You can view the track here –

Sanjeev Kohli’s contribution include a hilarious stalker’s story all about Chris De Burgh and a tale of Wimbledon that has since been praised by Pat Cash! Sanjeev, Emma Pollock and Jill O’Sullivan are joined on the album by award winning artist Celie Byrne, Calamateur and Calamity Horse.

The Grand Gestures debut album will be released on June 4th through Chute Records and this Scottish collective wowed audiences as they performed a one off show at Glasgow’s King Tuts on 1st June.