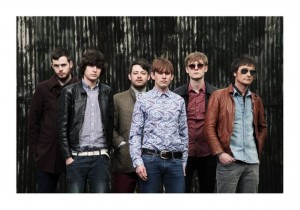 Having spent the start of 2012 putting the final touches to their debut album, Folks have confirmed the release date and details of their new single ‘Skull & Bones’. The Manchester band toured with Miles Kane and played with Noel Gallagher at the end of last year as well as several headlining dates and have more dates lined up for the summer.

The band, who consist of vocalist Scott Anderson, guitarists Michael Beasley and Thom Fripp, Harry Gumery on bass, Wil Akroyd on keyboards and drummer Elliot Barlow have been playing in and around the North West for some time now, catching the attention of the BBC Introducing team who recently invited them in to play a session. A few tracks put up on their website got to the right ears and the aforementioned support slot invites came along as well as a slot at the HMV ‘Next Big Thing’ shows which they grasped with both hands. Indeed Noel Gallagher was so impressed he invited them back to play with him this summer when he performs at Edinburgh Castle.

The album features twelve tracks of exemplary timeless tunes, ‘I See Cathedral’ illustrates how Folks transcend their influences to produce their own distinctive vision of classic song writing with just a trace of psychedelia, nodding to the Beatles here and The Beach Boys there, but modern, made new.

FOLKS have announce a string of UK dates over the summer:

My Iron Lung Sign to Pure Noise Records; Debut EP Grief to Be Released This Summer‏