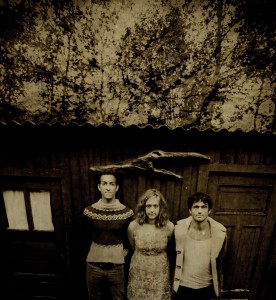 Refreshing, unique and intriguing trio ALL WE ARE introduce themselves with gorgeously enchanting free song
Having spent weeks entrenched within a Norwegian forest writing in an isolated cabin, arranging structures from an abandoned city schoolhouse and recording inside an ancient church, Liverpool’s enchanting  ALL WE ARE have now emerged with their alluring  ‘We Hunt’ EP.
To celebrate the digital release via Payper Tiger Records, the transnational Alt-Folk-Pop trio are offering everybody it’s beautiful and absorbing lead track ‘CARDHOUSE’ totally for free.
With a diverse mix of Brazilian, Irish and Norwegian nationalities forming the structure of the band, upcoming ALL WE ARE and their luscious mix of boy/girl/boy vocal harmonies, hypnotic drumbeats, pulsating basslines and floaty guitars combine together to create an gorgeously engulfing sound, which fully becomes most intense to experience at their notoriously magnetic live shows. Their unique, refreshingly simplistic and stripped-back sound has swiftly made them a firm favourite in their hometown of Liverpool, whilst relentless UK and foreign shows are starting to generate a genuine quality buzz amongst fresh crowds, with early heat amongst tastemakers suggesting they could soon be touted as a serious one-to-watch for the near future.
The instantly catchy and gloriously anthemic ‘CARDHOUSE’, being offered as a FREE DOWNLOAD, uses it’s bass and percussion to rise from the sound of a throbbing heartbeat in it’s verses to a more dramatic military-style march in it’s chorus- the change in power of which could even be suggested to metaphorically represent a cardhouse standing solidly firm to suddenly falling apart as the trio (Rich, Guro and Luis) explain “The song Cardhouse is essentially about loss. The cardhouse is representative of the life you build around someone you…. It’s tenuous at best and can easily come crashing down at an unexpected moment.”
In order to further develop their own unique sound, the decision to write in an isolated cabin deep within a Norwegian forest and arranging the songs in an abandoned city-school was a carefully-calculated choice for the intriguing trio. Vocalist/ drummer Rich states “Writing whilst totally cut off from the rest of society and surrounded by a haunting, tranquil beauty is certainly very inspiring for us. We actually feel the Nordic forest hillside rubbed off on the way some of the guitar lines actually sound, particularly in Cardhouse…”

ALL WE ARE release ‘Cardhouse’ as a FREE DOWNLOAD alongside it’s new video released today on Saturday 23rd of June.

The World Is A Beautiful Place (And I am No Longer Afraid To Die) Begin Recording Topshelf Records Debut LP; Band To Document Sessions with Series of Video Journals; Catch Them On Tour in July and August‏