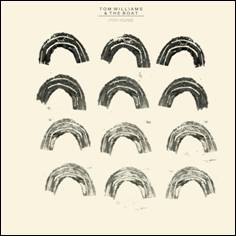 “Moments of genuine thrill and excitement.” – The 405

‘Too Young’ is the third single to be lifted from the current album ‘Teenage Blood’. An uplifting, buoyant track, ‘Too Young’ represents a newly found pop sound for the band. A wonderful blend of lilting harmonies and melody, lead by a catchy guitar riff, the track sees Tom taking a softer, gentler tone. Musically referencing The Cure to a Subterranean Bob Dylan, the song sees the band break free from previous folk references into a fresher sounding British guitar pop sound, more typical to the most recent material.

In keeping with the homegrown appeal of the  band and DIY ethic of the new ‘Teenage Blood’ album (out now on Wire Boat Recordings/Moshi Moshi Records) , Tom Williams and The Boat have given fans a chance to vote for which towns and cities they visit for their forthcoming June 4th – 8th headline tour via Detourjam.

The votes have been counted and the following cities have been confirmed for the tour! Tickets are still available to purchase on the below links:

In addition, Tom Williams and The Boat have upcoming festival dates planned, with appearances confirmed for Lee Fest (June 30th), The Secret Garden Party (July 19th) and Bestival (Sept 6th -9th) – so much to look forward to!

It’s been a great year for the band so far, recruiting new fans and receiving solid support from their loyal and dedicated followers. TWATB show no signs of slowing down with live dates and festivals appearance is view. Amazing radio coverage has further raised their popularity and profile, from the band being ROTW on Mary Anne Hobb’s show, recording sessions for Lauren Laverne’s 6 Music Show and John Kennedy’s XFM slot. Radio 1’s Huw Stephens has also made ‘Teenage Blood’ his album of the month in May in association with Topman CTRL.

With more exciting plans afoot, the band will undoubtedly be a constant fixture for the summer months ahead!

Planet Of Zeus confirmed for Bloodstock!‏