The Joy Formidable Complete Recording Sessions For Their Sophomore Record 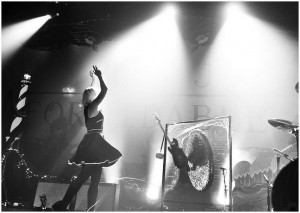 Sarah Jeynes for the photo - http://www.sarahjeynes.com/

Welsh trio, The Joy Formidable are happy to announce that they have finished recording their long-awaited sophomore album. Recorded whilst touring across the American landscape and within a cabin in Maine, the album is the follow-up to the band’s acclaimed 2010 debut The Big Roar. Mixed by legendary Andy Wallace (Nirvana, Jeff Buckley Rage Against The Machine), the release date is yet to be confirmed.

In a recent interview with SPIN.com, lead-singer Ritzy Bryan revealed that the band recorded 13 songs that are more defiant, focused, and expansive than those on The Big Roar.

“I think we found ourselves quite challenged by allowing our musical palette to grow. That’s always kind of exciting about the music that we’re making, that it can catch people off-guard in different ways.”

Bryan also revealed that the orchestral parts she and bassist Rhydian Dafydd wrote for a select few tracks were recorded in London. You can read the entire piece for SPIN.com here.

The Joy Formidable will preview some of their new material on the road this summer during their performances at some of the summer’s biggest and best festivals. For a full list of tour dates see below: