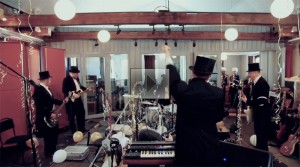 The Hives are pleased to reveal the new music video for “Go Right Ahead,” premiering today on Stereogum. The video was filmed live during the recording of the album, at RMV Studio on the island of Skeppsholmen in Stockholm, Sweden. The footage offers a glimpse into the gorgeous new studio owned by Benny Andersson from ABBA.

The Hives elaborate, “We recorded large chunks of LEX HIVES at Rixmixningsverket. It is a new studio that Benny Andersson from ABBA built in the heart of Stockholm, and he cut us a deal we just couldn’t refuse. We were the first band to record there. The video shows us walking to the studio on the first day of the second week of recordings. We basically set up a bunch of cameras in order to film while we recorded the take to make this more realistic than most “rock videos.” The thing is, we needed extra mouths and hands since we couldn’t do it all ourselves at the same time. These were generously supplied by people close and dear to us who can be seen in the film. Even Randy Fitzsimmons can be seen through the studio window wearing a mask. Randy on camera is a historical first. This moment is also a historical first. We give you.. We tell you to… GO RIGHT AHEAD!”

Their highly-anticipated new album, Lex Hives,  is due out June 5 via the band’s own Disques Hives label and comes in advance of a North American tour that kicks off June 19 in Washington, D.C. A more extensive U.S. headlining tour is in the works for this Fall (details to come). Lex Hives is now available to pre-order on iTunes, including a Deluxe Edition that features bonus tracks produced and recorded by Josh Homme.

The band recently made an explosive return to the live stage with a handful of performances in the U.S., including a hugely successful performance at Coachella, an intimate show at NYC’s Webster Hall Studio, and a performance on Jimmy Kimmel Live that saw the band playing two new songs: “Go Right Ahead” and “Wait A Minute.”

The Hives’ new album Lex Hives is up for pre-order on iTunes.