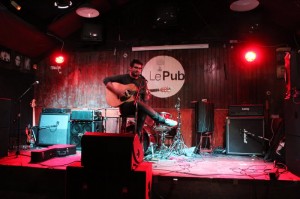 If you want an example of how to make a lasting musical impression on foreign soil, you could do worse than to take a leaf out of Evan Weiss’s book. For the next 6 months, the punk-rock storyteller behind Into It. Over It. is due to be in the UK and Europe on three separate occasions. Firstly on a headliner tour starting in Europe and finishing with a healthy chunk of UK dates, another solid UK tour with Polar Bear Club and then rounding it all off with a weighty European stint on the epic Visions sponsored La Dispute tour.

This won’t be the first time Into It. Over It. will have charmed UK audiences with captivating tales of everyday life that nearly all of us can relate to. This will be Evans fourth trip to the UK thus far, making it clear that he is dedicated to reaching his fans, no matter where in the world they happen to be; and with a tour like this, the fan base is only going to be getting bigger.

Touring isn’t the only thing that keeps Into It. Over It. busy. In 2007 he released a new song every week for a year and named it the 52 Week project. After that he released 6 split 7”s for 12 songs inspired by experiences in 12 different towns, and following a split LP in 2010 with buddy’s in Koji, 2011 saw the arrival of Proper, arguably his most accomplished work to date.

Polar Bear Club/Into It Over It:

Mavis Staples Shares A Capella Remix of ‘One More Change’ by ALA.NI