In Pictures: Blood Red Shoes + The Cast Of Cheers @ The Trinity Centre, Bristol

Back in March we had the delight in meeting Dublin 4 piece The Cast Of Cheers during their nationwide co-headline tour with London trio Theme Park.

On Monday 5th March we joined the four in Bristol for their show at The Louisiana. Prior to their performance we filmed an exclusive interview with the band. During our interview we found out about their forthcoming album release, the inspiration behind their compositions and at the time their impending tour with acclaimed duo Blood Red Shoes. Which you can watch below..

A month later and the first day of May; Circuit Sweet returned to Bristol to catch up with The Cast of Cheers who are now engrossed  in their tour traveling nationwide as support for Blood Red Shoes. The Trinity Centre opened its doors to both accomplished acts for a night that united all live-music lovers and all fans of the musicians. 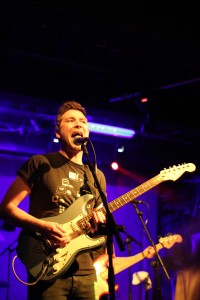 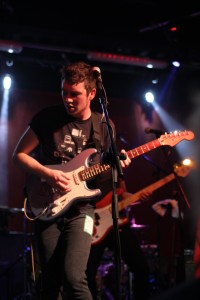 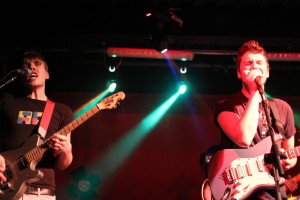 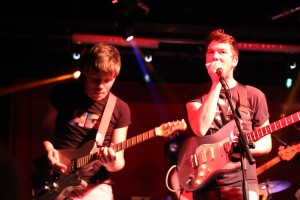 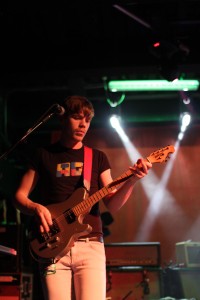 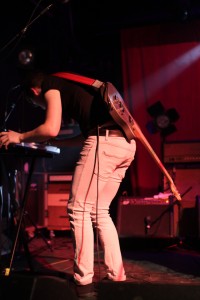 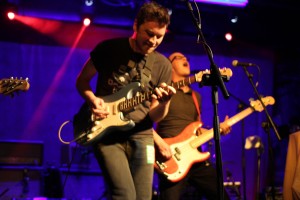 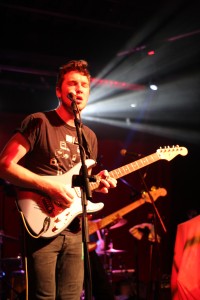 As the only support of the night The Cast of Cheers quickly took to the stage as the venue filled out. Due to Blood Red Shoes’ vast amount of supporting fans the crowd size was on a much larger scale to the quartet’s previous Bristol performance. As well as that playing on a much larger PA system  to a room with its own unique acoustics and to play a venue with a crowd capacity teeming. It was a privilege to hear and witness The Cast of Cheers perform on more of a capacious proportion.  From the first note played – Conor, Neil, John and Kevin instantly mesmerize their audience. Each musicians’ powerful energy is displayed on stage and the entire band thrive from one another and provide a compelling and thoroughly enjoyable set.

Their set list revamped from the last Bristol visit amalgamating older material from their debut ‘Chariot’ and tracks from their forthcoming album including their latest single release ‘Animals’.  The new material from the band taken from the forthcoming album release, prove a more mature and more experimental approach from the four.  Together its noticeable that the band have become comfortable with their new ventures; with stronger track formations, deeper lyrics and more daring and tentative explorations within their orchestrations.
This is a band with so much potential both live and in their recorded endeavors.  Maintaining their lively and rhythmic persona throughout their live performance. Their confidence within themselves, their unity as a band and their passion for connecting their compositions to the crowd makes each live performance more illustrious than the last. The Cast of Cheers are a band that are gaining the right attention, their hard working efforts are paying off and to have a support band that rivals the headline compliments such workmanship.

As the band departed the stage, the backdrop altered. A doomy red light filled the stage and alongside the musicians equipment stood several stacked TVs displaying the static exposure adding to the atmosphere and in keeping with the album cover of the headlining acts latest release.  Blood Red Shoes show no slowing down, just when you think they’ve reached the height of their career- more press coverage, more touring and another album is released. Another pinnacle on the progression of the band, as the duo continues to go from strength to strength. ‘In Time To Voices’ the bands third studio album was released March 26th this year. The Brighton based duo have been touring throughout April and all of May supporting their new release. The new record was recorded at The Motor Museum in Liverpool continuing their successful partnership with Mike Crossey who co-produced the album with them. Its stated their new record sees Blood Red Shoes come of age musically building on their punk roots and moving into ambitious, three dimensional rock- their intense 14 date tour nationwide was to put this statement into live practice. 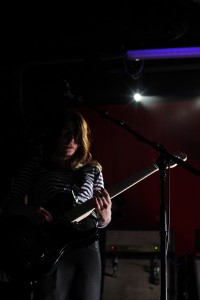 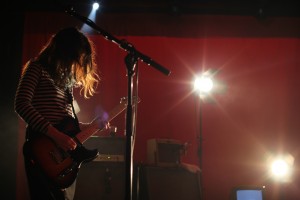 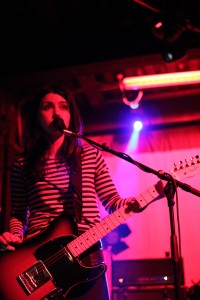 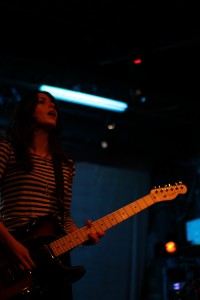 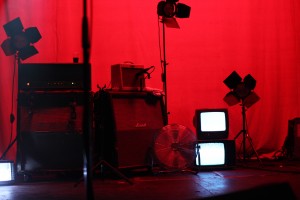 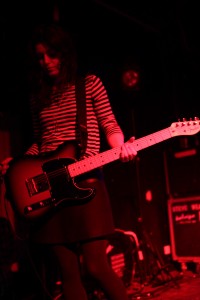 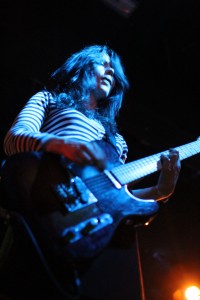 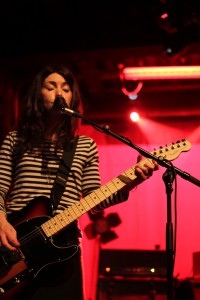 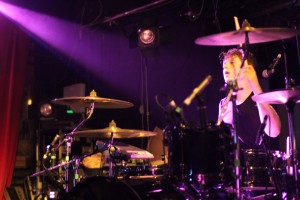 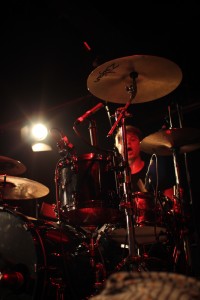 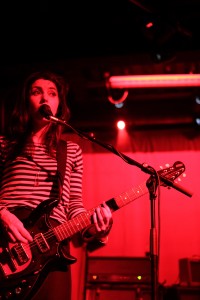 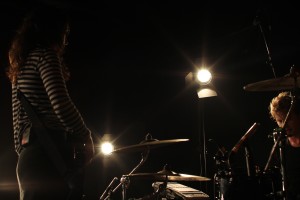 The dynamic duo are an unstoppable force. To half of Circuit Sweet Blood Red Shoes’ live performance was one witnessed and enjoyed on several occasions over the last few years but for the remaining half of circuit sweet- it was a new experience.  The notable faces that make up the outfit found in Laura-Mary Carter and Steven Ansell creatively on record and projected live are simply powerful. From the start of their set opening with the eminent single ‘It’s Getting Boring By The Sea’ and combining 8 Years of material into an hour and a half set- the band maintained that powerful intensity. Mixing material from their debut ‘Box of Secrets’, their 2010 follow up ‘Fire like This’ and their newest release the pair delved into a variety of compositions displaying their capabilities. Their set comprised of forceful chords, prevailing distortion and harmonious vocals from the pair.  New tracks ‘Cold’  ‘In Time To Voices’  and ‘Lost Kids’ all displayed a more mature direction from the band. Comfortable with their aptitude and how they can develop Blood Red Shoes more. Whereas the more distinguished material such as ‘Doesn’t Matter Much’, ‘Heartsink’, ‘Light It Up’, ‘I Wish I was Someone Better’ to name a few all oscillated in the musicians strength.  Laura’s alluring vocals and gritty tone accompanied by Stevens aggressive and forceful drum playing combined with his unique hardhitting melodic vocals provided an energetic and gripping set.

As the band left the stage the crowd screamed and begged for their return. And within minutes Steven and Laura walked back on stage for their encore. ‘Colours Fade’ the extensive single which radiates emotion hypnotized the crowd before a change of  pace. As the duo played a new single from their latest release ‘Je Me Perds’. The orchestration  may be short in time length but this is the track highlighting those punk roots; erratic drums give off a brutal hardcore essence harmonized with attacking screamo lyrics and vocals  from Carter. The energetic track simply left the room in awe. As the two members left the stage surrounded by their loud feedback their crowd praised the evening’s talent.