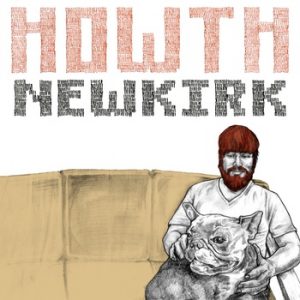 Howth have just celebrated the release of their sophomore album Newkirk.

“In a lot of ways this feels like our first album because we have had such an extreme metamorphosis, personally and musically, since our debut.”

Howth began as two roommates experimenting in minimal ambient folk music and has since become a collection of five friends with so much vibe you would think they had been playing together for the last decade of their twenty-something lives. And in fact, some of them have been. Shortly after returning from Palestine where he had been teaching children the joys of music, lead guitarist and multi-instrumentalist Blake Luley again met up with songwriter Carl Creighton in his home state of Minnesota. By way of a mini tour, Luley and Creighton returned to New York City and began to look for like minded musicians to help expand the sound they had developed together.

Despite living in the capital of cool known as Brooklyn, the search for what would become the rest of Howth ultimately ended with two of New Jersey native Luley’s high school band mates, Neil Acharya (bass, vocals, saxophone) and Miles Waltuck (drums), and Luley’s girlfriend, Aviva Stampfer (vocals, keyboard), herself a transplant from Portland. The years of rapport between these individuals is immediately apparent and has become a hallmark of the music they create, most recognizably in Howth’s debut as a quintet, Newkirk. Recorded in Waltuck’s basement and slated for release in May 2012 by Mecca Lecca Recording Company, Newkirk retains the intimate songwriting of Creighton while capturing five talented musicians having the time of their lives with their closest friends.

Newkirk was officially released May 1st and the album is streaming in its entirety below.