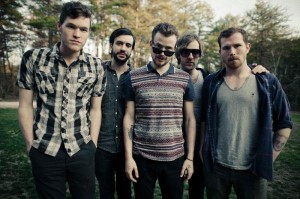 North Carolina’s Flagship is poised to break out with the release of their debut EP blackbush. The 5-song EP is out today via Bright Antenna/ILG, and can be heard at Baeble Music, who declare the band “matches the emotional and nearly spiritual alternative rock of U2 circa Achtung Baby, with the deep-throated baritone delivery of lead singer Drake Margolnick ala Ian Curtis from Joy Division and some of the seething anger and rawness of We Are Augustines.” The release comes in advance of an anticipated full-length debut expected this fall.

For a full EP stream and a look inside the making of blackbush, check out the behind-the-scenes video at Earmilk.com. Earlier this year, American Songwriter premiered the video for blackbush single “Backseat” – watch it here: http://www.americansongwriter.com/2012/03/video-premiere-flagship-backseat/.

Helmed by the talented singer/song writer/guitarist Drake Margolnick, Flagship just wrapped a cross-country tour supporting label mates The Wombats, where they performed in front of sold out crowds in New York, Washington, D.C., Boston, Chicago, Salt Lake City and more. With Drake on lead vocals, his lyrics come to life with the help of lead guitarist Matt Padgett, keyboardist Grant Harding, drummer Michael Finster, and bassist Preston Hayden.  The 5-piece band is the newest addition to Bright Antenna, home to such artists as OMD, The Wombats, Magic Wands, Middle Class Rut, Beware of Darkness and more. They will help ring in Bright Antenna’s 5th birthday on May 10, with a special concert at The Uptown in Oakland, CA in what will be their first ever Bay Area appearance.

Flagship’s new material finds the band comfortably traversing varying territories ranging from the alternative folk tendencies of Grizzly Bear to the beautifully atmospheric swells of Sleeping At Last and Arcade Fire, and even to the frenzied passion of fellow southerners Colour Revolt.

In Pictures: Blood Red Shoes + The Cast Of Cheers @ The Trinity Centre, Bristol