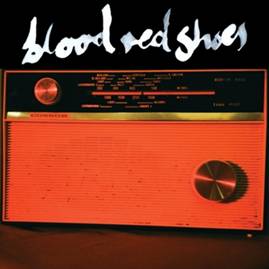 “Fizzing with ideas, the future looks bright.” Q
“…the hooks get under your skin.” The Independent
“This is by far their best release to date.” – Gigwise
“These Shoes still have a vicious spike in their heel after three albums.” – Daily Star

Blood Red Shoes are set to release their new single ‘Lost Kids’ on May 14th via V2/Co-Operative Music.

The second single to be taken from the Brighton duo’s new album ‘In Time To Voices’, ‘Lost Kids’ is a blow to the senses adding more punch to their new change of direction. Laura-Mary Carter and Steven Ansell’s vocals are double tracked for a potent layered effect over a killer hook and huge chorus. Angst ridden cries create a tense and fraught atmosphere, conjuring up images of chaos, mayhem and unrest.

‘This was written bang in the middle of the “London Riots”. At the time the images on TV were of streets on fire and smashed up buildings, and strangely Laura and I were fighting like crazy at this point. It just felt like there was a lot of destructive, frustrated energy in the air, but we didn’t want to write about it as an overtly political song, so this is an attempt to bring together all of that into one. It does feel like there are many lost souls in the world right now.’

Currently in the midst of their two month European and UK tour, with Reading and Leeds main stage appearances to follow, the band have announced details of their biggest UK show to date, playing the Shepherd’s Bush Empire on October 18th.

The band have also announced details of their biggest UK show to date, playing the Shepherd’s Bush Empire on October 18th http://www.gigsandtours.com/tour/blood-red-shoes/