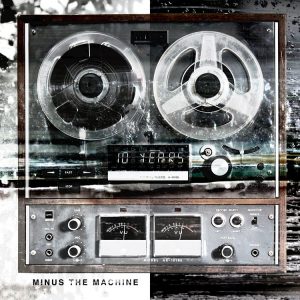 The band will kick off the “Minus the Machine” headlining tour on June 27 in New Orleans, supported by Fair to Midland and KYNG. They’re hitting over 20 cities nationwide including a date in their hometown of Knoxville, and a handful of festivals like Rockfest and Summerjam. They will be touring to support the release of the new album, and they’re excited to play some new songs this time around. This year, the band is playing Rocklahoma, sharing the bill with artists like Rob Zombie, Chevelle, Slash, and Creed.

After a solid and successful two years of Brian Vodinh touring as the band’s guitarist, he is looking forward to returning to the drum kit. Brian announces, “even though I started the band with the intention of playing guitar, for some reason drums have been always been the heartbeat of my thought process for the songwriting.  After touring for more than two years with me playing guitar, we collectively decided that it felt like the heartbeat had just changed a little and it was time to pump that old blood back into the veins of 10 Years.  I will be returning to the drum kit with a renewed passion and drive and with the release of Minus the Machine, our fans are in for the most emotional and energetic album and live show they have ever seen from us.” This tour is shaping up to be an experience that no 10 Years fan would want to miss.
Minus the Machine will be the band’s fifth studio album, following their successful 2010 release Feeding The Wolves,which broke into the Billboard Top 200 list at #12. Billboard proclaims “10 Years hits a sweet spot between rock and metal” and Outburn declares the band “succeeds at making solid rock songs with subtle unique touches and nuances.”
The band will release their new record on their own Palehorse Records in conjunction with Warner Music Group’s Independent Label Group. The album marks the band’s first release on their own label after a long tenure at Universal. 10 Years frontman Jesse Hasek explains the decision to release the album independently, saying “We wanted to create an album that has no boundaries.” He continues, “When you feel like you’re being told to go through motions and jump through hoops, it takes the heart out of it. It’s better to do what comes naturally and then figure out the after-effect.”
10 YEARS TOUR DATES:
May 19 – Maryland Heights, MO @ KPNT Pointfest, Verizon Wireless Ampitheatre
May 21 – Denver, CO @ Summit Music Hall
May 22 – Colorado Springs, CO @ Black Sheep
May 23 – Colorado Springs, CO @ Black Sheep
May 25 – Abilene, TX @ Lucky Mule Saloon
May 26 – Rocklahoma – Pryor, OK @ Catch The Fever Festival Grounds
June 27 – New Orleans, LA @ Southport Hall
June 29 – Dallas, TX @ Trees
June 30 – Houston, TX @ Warehouse Live
July 1 – Corpus Christi, TX @ Brewster Street Ice House
July 3 – Pensacola, FL @ Vinyl Music Hall
July 5 – Tallahassee, FL @ Coliseum
July 6 – Knoxville, TN @ The Valarium
July 7 – Chattanooga, TN @ Track 29
July 8 – Nashville, TN @ Marathon Music Works
July 10 – Baltimore, MD @ Ram’s Head Live
July 11 – Sayreville, NJ @ Starland Ballroom
July 13 – Portland, ME @ Asylum
July 14 – Hampton Beach, NH @ Wally’s Pub
July 15 – Bristol, CT @ Bleachers
July 18 – Flint, MI @ The Machine Shop
July 19 – Ft. Wayne, IN @ Piere’s
July 20 – Rockfest- Cadott, WI @ Chippewa Valley Festival Grounds
July 21 – Chicago, IL @ Bottom Lounge
July 24 – Fayetteville, AR @ George’s Majestic Lounge
August 4 – Summerjam- Centreville, VA @ Bull Run Park