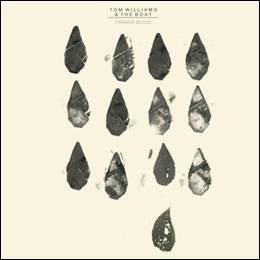 Tom Williams And The BoatNew Single ‘Teenage Blood’, released April 9thMoshi Moshi Records/Wire Boat RecordingsWATCH THE VIDEOwww.tomwilliamsandtheboat.co.uk | www.pledgemusic.com/tomwilliamsandtheboatwww.moshimoshimusic.com
Tom Williams and The Boat is set to release the second single ‘Teenage Blood’ on April 9th, the title track taken from the forthcoming album available on April 16th via Moshi Moshi Records/Wire Boat Recordings.A big country rock stomper of a track, ‘Teenage Blood’ sets the tone for the new album from the get -go, with its lilting harmonies and instant chorus. With a nod to cult heroes including Nick Cave, Tom Petty, Leonard Cohen to Teenage Fan Club, the song is crafted with the hallmarks that Tom Williams’ fans have come know lyrically; his poetic sharp wit and heart-felt tales of love lost. The title track dwells on the ‘sense of genetic inevitability’, of a broken relationship and its effects on the human psyche. In keeping with the band’s homegrown ethics and independent approach, Tom Williams & The Boat partnered with PledgeMusic in November 2011, marking a new approach to the album’s conception. The band wanted to offer their fans the chance to be intimately connected to the album process from the very beginning by offering them creative collectables and exclusive experiences of their choosing as a reward for their loyal support. To read more on the Moshi Moshi/PledgeMusic partnership, click HERE. Tom Williams & The Boat started work on their second album, ‘Teenage Blood’ in March 2011. Recorded in their long time HQ – a working brewery, in the heart of the Kent countryside, BBC engineer Simon Askew was yet again behind the mixing desk. Formed in 2007, Tom Williams & The Boat met in a local music venue in Tunbridge Wells. It wasn’t long before the group began to attract the attention of Steve Lamacq and Huw Stephens on BBC Radio’s 2 and 1 respectively, whilst also playing Radio 1’s Big Weekend and recording sessions for Radio 1 with Huw Stephens. Tom Williams & The Boat also played Glastonbury via the festivals own ‘Emerging Talent Competition’ and Latitude on the Lake Stage. They self-released their debut album ‘Too Slow’ in February 2011, on the ‘Wireboat Recordings’ label which received extensive radio support from the BBC introducing network and BBC 6 music on its release.