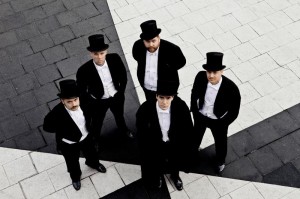 The Hives have announced a North American tour that kicks off June 19 in Washington DC. The dates will follow the release of their highly-anticipated new album Lex Hives, due out June 5 via the band’s own Disques Hives label, and come in advance of an extensive U.S. headlining tour in the works for this Fall (details to come). The band also performed two new songs on last night’s Jimmy Kimmel Live, including hit-single “Go Right Ahead” and “Wait A Minute.“

Tickets will go on sale to the general public, Friday, April 27 at 10:00am EDT via Ticketmaster.

The band made a return to the live stage with two explosive Coachella performances, which were widely regarded as a festival highlight. During the first weekend, Howlin’ Pelle Almqvist enticed the crowd of thousands to sit down during their last song, then rise back up en masse. However on the second weekend, he upped the ante by getting the entire crowd to lie down!

Here is what the press is saying about Coachella:

“…a moment that live festivals are made for. Almqvist is still one of
rock’s most engaging frontmen.” – LA Times

“This Swedish quintet remains one of the most riveting live rock bands of the last dozen years.” – SPIN

“The Hives were the real stars of the festival, tearing through one of the most fantastically fun sets of the entire weekend.” – Yahoo!

“…one of this weekend’s most impressive acts.” – MySpace

The Hives’ new album Lex Hives is now available for pre-order on iTunes.