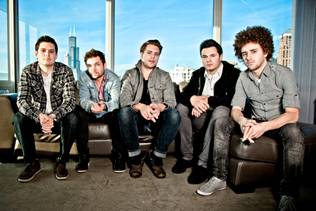 THE AUDITION
START FRESH WITH NEW SELF-RELEASED EP ‘CHAPTER II’
SET FOR RELEASE IN THE UK ON 11th JUNE, 2012
UK DATES INCLUDING SLAM DUNK FESTIVAL IN MAY
After departing Victory Records in July of 2010, Chicago-based pop-punk band THE AUDITION is set to write their own history with the self-release of their brand new EP, titled ‘Chapter II’ on 11th June in the UK to coincide with appearances at the 2012 Slam Dunk Festival in Leeds, Herts and Wales. Backed by the support of their fans around the world, ‘Chapter II’ sees the band heading in a fresh direction and honing their signature sound into one that demonstrates a maturity and breadth evident in their earlier releases but not fully realized until now. The first single from the EP, the catchy ‘You Make Me Sick’ can be heard here – http://soundcloud.com/madmacent/02-you-make-me-sick. The Audition has been touring with Every Avenue and We Are The In Crowd in the US, marking their first tour of their home country since 2010 and thus ending a hiatus that left their fans longing for a return to the road. The members of The Audition have been excitedly road-testing the material from their new EP after two long years off from touring and are eager to bring the show to the UK in May as the band have a long-standing history of effervescent shows in the country. They played on the Kerrang! Tour in 2007 alongside Biffy Clyro and The Bronx. The Audition also took You Me At Six out as support on one of their first nationwide headline tours, as well as playing at various other UK festivals and events including Slam Dunk, Give It A Name and Download festivals. Formed in 2003 by drummer Ryan O’Connor and bassist Joe Lussa, The Audition signed with Victory Records and released their debut album, ‘Controversy Loves Company’ in September 2005. By that point, the band’s line-up had come to include guitarists Seth Johnson and Timmy Klepek, as well as vocalist Danny Stevens. Their 2008 sophomore effort, ‘Champion,’ cracked the Billboard Top 200 at #157, and their 2009 release, ‘Self Titled Album’ hit #7 on Billboard Heatseekers. After the release of their fourth album, ‘Great Danger,’ and the fulfillment of their contractual obligation with Victory, the band began to write for what would become Chapter II. The Audition see this new EP as a second chapter to the career and legacy they want to leave behind.LIVE DATES 26th May Slam Dunk Festival Leeds University27th May Slam Dunk Festival Herts Uni, Hatfield28th May Slam Dunk Wales Cardiff Uni
www.facebook.com/theauditionband | www.twitter.com/theauditionband