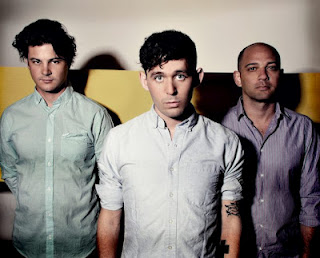 Last year, The Antlers released “Burst Apart”, an album of such incandescent beauty and towering ambition that it held critics and audiences alike in its powerful spell. The Fly magazine and Drowned in Sound both named it their album of the year, while other publications such as Sunday Times Culture, Guardian and even the BBC included the album in their year-end lists. Their jaunts to the UK also saw sold out shows across the country, culminating in a glorious, full-capacity show at Koko in November.

April will bring about the release of the final single from “Burst Apart”, “French Exit”, and, excitingly, also see the band play their biggest headline UK show to date, at Shepherds Bush Empire. The single, as is to be expected, is nothing short of gorgeous, with the Brooklyn trio seemingly drawing inspiration from vintage Paul Simon to create an upbeat pop song that nevertheless packs a powerful emotional wallop, as lead singer Peter Silberman harshly rebuffs a lover’s advances with lines like “I’m not a puppy you take home/ don’t bother trying to fix my heart”.

And if ever there was a place that befitted the band’s skyscraping sound, it would be Shepherds Bush Empire. Their London shows to date have all been heartstopping, mesmerising affairs, and this show looks set to be their best yet.