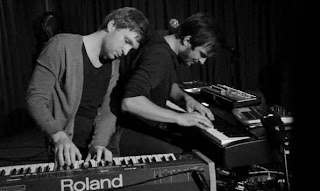 Labelmates Icelandic composer Ólafur Arnalds and Berlin-based composer Nils Frahm have joined forces to create the ambient and electronic 10″ vinyl entitled ‘Stare.’ Joined by fellow-Berlin cellist Anne Müller, the 10″ is exclusively available on April 21st Record Store Day and available for pre-order at Erased Tapes online. Frahm and Arnalds recently embarked on a European tour together and Frahms will continue to perform all over the world this spring.

In December, Arnalds released his Living Room Songs EP, where he created and released one new song per day, for one whole week, recording and filming the whole process live. Instantly watch the videos or order a physical copy of the release here. Earlier this year, Arnalds also released his first Hollywood film soundtrack and score for Sam Levinson’s Another Happy Day, and his single ‘Allt varð hljótt’ from his 2009 ‘Found Songs’ EP is featured in the recent box office hit The Hunger Games .

‘We got together in April 2011 and after having a big pizza, I plugged in some old analogue synths and we played for four days until late in the night…we decided to do another 4-day jam at Óli´s E7 studio in Reykjavik. So I flew there in the end of October to repeat the trick and record some out of this world ambient music. It didn’t take us too long to write ‘a1’ and ‘a2′. I can’t wait for the follow up!’ – Nils Frahm

‘I’m not sure why we decided to keep it secret, it just happened. But it sure was fun! I remember a party at Robert’s (Erased Tapes founder) flat in Berlin, where me and Nils stood in the corner the whole night whispering about the project. We then delivered the fully mastered record with finished artwork to Robert around the 5th anniversary of the label. It would have been nice to be there to see his face…’ – Ólafur Arnalds