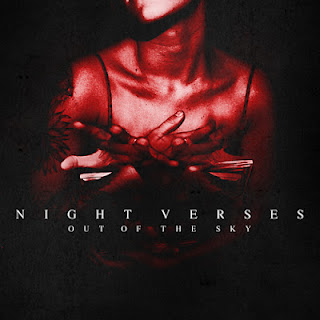 NIGHT VERSESDebut EP ‘Out Of The Sky’ to be released for free download on 15th May, 2012 at 8.00amwww.nightverses.comProduced by Kris Crummett (Man Overboard, Closure In Moscow, Alesana, Emarosa, Dead And Divine, Fear Before The March of Flames)
NIGHT VERSES IS :
Douglas Robinson – Vocals | Nick DePirro – Guitar | Reilly Herrera – Bass | Aric Improta – Drums / sampling

The instrumental foundation of Night Verses have been playing together for over seven years. In 2009 after prior projects didn’t work out, Nick, Reilly and Aric recorded several instrumental tracks in hopes of finding the right singer and frontman. While living in Los Angeles in 2010, Douglas Robinson (formerly of The Sleeping) had the opportunity to see the trio play together. Though Douglas moved back to New York shortly afterward, both parties stayed in contact – sending songs and ideas back and forth over the next year. After another failed attempt at getting a like-minded frontman and with Douglas wrapping up the touring cycle of The Sleeping’s last record, Night Verses began to realize itself as a full time project with the instrumentalists’ ideal vocalist keen to be a part of the band. Drummer Aric says of the process “Nick, Reilly and I literally went years without any sign of a singer capable of achieving what we all thought was needed to complete our sound. Despite this, we continued to write 5 nights a week, being motivated solely by our progression as musicians and the hope of finding that final member. It wasn’t until we came in contact with Douglas that we felt like we met someone else who was as willing to push themselves musically and as creatively as we do.”

In late 2011, Portland-based producer Kris Crummett connected with Douglas, who shared the self-recorded demos the group was working on. After expressing interest in recording the band, the quartet went to Interlace Studios to record the four tracks that would become their debut ‘Out Of The Sky’ EP. An introspective collection of songs with a tendency towards dark subject matter and a visceral kick of instrumental finesse, Night Verses’ first recordings will be released for free download at www.nightverses.com on 15th May, 2012.

TRACKLISTING
1. From The Shadows Where I’m Low
2. To the Ends of the Earth
3. Be Happy With Yourself, I’m Staying Here In Hell
4. I’ve Lost My Way Back Down