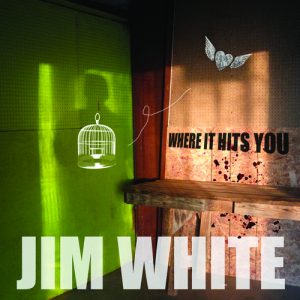 Jim White’s new album “Where It Hits You” was released on Loose in February 2012. The album is as rich and diverse a record as Jim has ever produced. From the brooding dreamlike opener, “Chase The Dark Away,” to the wild eyed stomp of “Here We Go,” to the Beefheartesque “Infinite Mind,” to the Harvest-era Neil Young ringer “My Brother’s Keeper,” Where It Hits You finds Jim in full musical stride, effortlessly blending genres and approaches in ways that sometimes boggle the mind. But as White’s work has shown over the arc of his career, despite the experimental extremes he recklessly embraces, there’s always a cohesive, singular identity that holds the divergent influences together.

AMERICANA ALBUM OF THE MONTH  ★★★★

“once an Americana pioneer but now an elder statesman, White is still showing young pretenders a clean set of Cuban heels”  ★★★★

THE INDEPENDENT ON SUNDAY

“Jim White’s take on the South is as peculiar and distinctive as it comes… If it’s Southern Weird you’re after, Jim’s your man.“

Jim White’s critically acclaimed debut album, The Mysterious Tale of How I Shouted Wrong-Eyed Jesus, tapped into the zeitgeist of what would soon blossom into the lo-fi Americana movement. “Back then (1997) there was maybe twenty of us doing it – Wilco and 16 Horsepower, of course Lucinda and Steve Earle and The Jayhawks. Now, hell, there’s a million lonesome geniuses out there, each one singing their heart out sadder than the next.” Jim White is known primarily for both his genre bending records like his 2001 break out album No Such Place and 2007′s Transnormal Skiperoo, as well as his award winning BBC documentary film Searching For The Wrong Eyed Jesus.