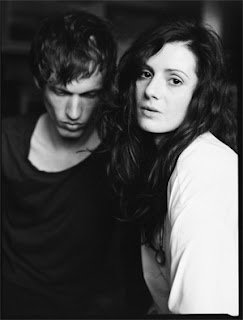 Single “Passage” can also be download free here:
Exitmusic return to Europe in May to preview their debut album on a run of live dates, including the Great Escape in Brighton and Walk The Line Festival in the Netherlands.
UK & Europe tour dates:
11th May, THE HAGUE, Walk The Line Festival
12th May, BRIGHTON, The Great Escape at The Royal Abert
14th May, GLASGOW, King Tuts with Zulu Winter
15th May, LEEDS, Brudenell with Zulu Winter
17th May, LONDON, Boston Arms with Zulu winter
20th May, AMSTERDAM, Bitterzoet Indiestad with Trailer Trash Tracys
21st May, PARIS, Divan du Monde with Trailer Trash Tracy
23rd May, LONDON, Electrowerks
Brooklyn, NY’s Exitmusic – comprised of Devon Church and Aleksa Palladino – will release their debut album, Passage, on Secretly Canadian on May 21st, 2012.
Passage was a long time in the making, and certainly worth the wait. Church and Palladino started writing together several years ago, when the Canadian-born Church moved to New York City, Palladino’s home, following a year teaching English in Taiwan and India. Their collective sonic interests – layers, textures, churning, spacious guitars, blinking electronics, shimmering vocals – created a fruitful writing partnership immediately. Their songs began to take on new dimensions when the pair moved to Los Angeles a year later, finally committing their compositions to the recording process.
Recorded at Rare Book Room in Brooklyn with mixer Nicholas Vernhes (Dirty Projectors, Deerhunter), Church and Palladino, along with the assistance of Dru Prentiss and Nicholas Shelestak, built on the chilling, beautiful aesthetic they had created as a duo when recording at home. The result is a sound that is more powerful and more nuanced, covering broad oceans of emotional terrain. Opener “Passage” is like watching a great shifting of tides through rapid time-lapse photography, introducing new dynamics in one magnificent breath. Elsewhere, on “The Night,” Exitmusic’s gaze moves upwards with chiming, blurry guitars, the heavenly sighs of Palladino in the background and one of the album’s finest choruses in the foreground, while “Storms” sounds like Peng-era Stereolab as seen through a fun house carnival mirror. The album has a bona fide, fist-pumping anthem – “The Modern Age” – and closes elegantly with the starkly devastating “Sparks of Light.”
Album track listing:
1. Passage
2. The Night
3. The City
4. White Noise
5. Storms
6. The Wanting
7. Stars
8. The Modern Age
9. The Cold
10. Sparks of Light
Get More:
https://www.facebook.com/weareEXITMUSIC
https://twitter.com/weareexitmusic
http://allthingsexitmusic.tumblr.com