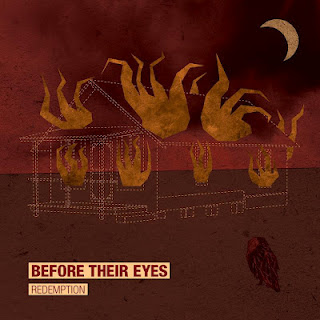 Findlay, OH post hardcore act Before Their Eyes had an impressive debut week with Redemption, their first album since 2010’s Untouchable (Rise Records). The new LP which was released March 27, landed at #29 on Billboard’s Heatseekers chart, as well as at #10 on the Alternative New Artists chart, #38 on Hard Rock and #82 on in the Independent Record Label Album chart.
The debut numbers are all the more impressive considering the act has not done a full US tour since 2009 and toured only a total of 7 weeks in 2010.

Now signed to InVogue Records, the indie label owned and operated by front man Nick Moore, Before Their Eyes will soon embark on the headlining Redemption Tour, with label mates Legacy and Belle Histoire lending support. The trek kicks off May 4 in Painesville, OH.

Before Their Eyes was also recently added to the lineup for Bledfest on May 26 in Howell, MI where they will join such acts as The Early November, The Wonder Years, The Swellers and more.

The band recently debuted a music video for the track “Lies”, which can be viewed here: www.youtube.com/watch?feature=player_embedded&v=IfQ90PhHApo.