March 5, 2012
Initially a tongue-in-cheek reaction to their indie-schmindie roots, You Slut! formed in Derby/Nottingham (UK) in 2004 as an instrumental math-rock experimental 4-piece. They quickly found favour with those who concern themselves with the more intricate side of rock music through explosive live shows and releasing their debut, 2005’s 6-track EP ‘Grit Eyed & Greasy Tailed’. The EP was followed in 2007 by their 8-track Mathsterpiece ‘Critical Meat’ album released in Japan (Xtal Records) and the UK (Stressed Sumo Records).
You Slut! deal in instrumental music that rarely finds itself drifting into the cliche-ridden Post-Rock world of meandering soundscapes and drawn out build ups, they instead fire shots of riff-driven, tempo-twisting, rhythm-riding adrenaline into the heart of their sound leaving the listener clinging on for dear life. Reviewers grasping for comparisons have drawn upon the likes of And So I Watch You From Afar, Adebisi Shank and more established artists in the order of Don Caballero, The Fucking Champs and Hella. 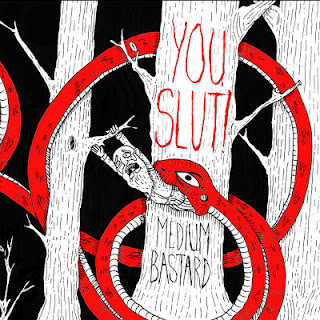 Magnifiererer – Taken from Medium Bastard the second album from You Slut!
Out 16.04.2012 through Stressed Sumo Records
Throughout 2011 You Slut! put their other musical projects to one side (Amusement Parks On Fire, Pilgrim Fathers and Mascot fight) and MEDIUM BASTARD was recorded and mastered by the band’s guitarists Richard Collins and Gavin Poole at the Snug Recording Company’s studios in Derby, UK. All cover artwork was designed by Joshua ‘Sharkguts’ Mikel of Atlanta, Georgia.
The album will be released on Digital, CD and 12″ Vinyl formats.
* the vinyl version will include both albums MEDIUM BASTARD and CRITICAL MEAT in their entirety – two albums of instrumental, rifftastic, power-prog-disco-math-pop warfare.