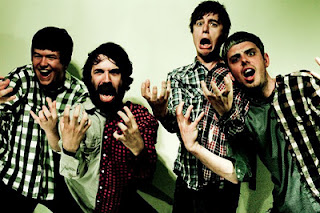 The promising Guildford/Brighton based 4 piece TRAILS, are back with a new single release.
TRAILS consist of Sam Hopper- Vocals and Guitar, Will Duff- Guitar and Vocals.  Adam Rains- Drums and Vocals and James Candler- Bass and Vocals.

Trails’ new single ‘A Turn Of Phrase’ is OUT NOW!
Watch the self produced video here:
Download the track (complete with secret track) at their bandcamp page. You can find the single streaming below-
Music and lyrics by Trails. Recorded and mixed at Spiral Studios by Chris Coulter and Doug Grant of Homeless Music.
Support the vivacious band and their self funded release.
Catch the band live at their listed gig dates below.
Live Dates:

ShopRadioCast Exclusive!!! Shopradiocast To Re-Release Two Albums From Influential Punk/Indie Outfit PARK For The Time On Vinyl ; 2001’s ‘No Signal’ and 2003’s ‘It Won’t Snow Where You’re Going’ Out On Deluxe, Multi-Colored, Gatefold Vinyl on May 1‏st [News]