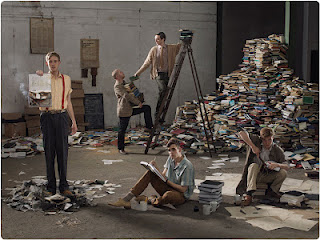 Regulars of our site found in Spring Offensive; the emotive explosion of tender melodic, dark math related pop 5 piece hailing from Oxford- are back with a stunning new video and a vast selection of tour dates.

Oxford 5-piece Spring Offensive are a relentlessly inventive guitar band complete with rich harmonies, pounding rhythms and dark lyrics. With a live show charged with energy, their influences include Death Cab for Cutie, The National and Wild Beasts. Having received support from BBC Introducing across Radio 1 and 6 Music, and recently headlining a show at O2 Academy Oxford, played at Truck and Underage Festival. They finished their first tour of Europe just before Christmas and are about to embark on their second.

Following on from the release of their single ‘Carrier’ in February, the band have returned with their strong release ‘Worry Fill My Heart’. This single is released today (Saturday 17th March) . The single has just been playlisted on Amazing Radio and follows their recent online buzz from it’s b-side ‘Carrier‘, and their sell-out Oxford show at Modern Art Oxford. Spring Offensive are also still announcing their upcoming UK and European tourdates some of which featured below. 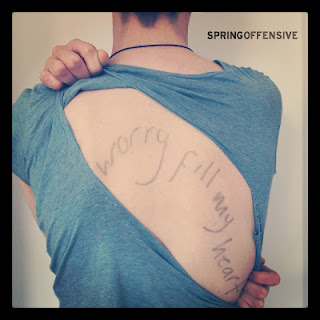 The physical CD release of ‘Worry Fill My Heart’ also boasts an exclusive track entitled ‘Ridgefield’ and a remix from WILDSWIM. The four songs are joined by more artwork and an exclusive poster, all packaged together with a bespoke envelope addressed with the buyer’s very own name on it….This special physical single will be available to buy during their upcoming tour before it is available to buy online- so it’s best to come along to see their stunning live show whilst they are on tour in order to get your hands on one!

When asked about the meaning of the song, vocalist Lucas Whitworth explains, “It’s a reaction to that feeling of impotence when confronted with a difficult choice. So many of our friends, family and people we meet are stuck in this terrible position – we keep being told that we’re lucky to have a job, as unemployment soars, but we still need an outlet to escape the monotony, to stop our lives from stagnating and becoming grey. So we sing, or we go to gigs, or we do whatever we need to just to feel engaged...”

As mentioned the band are embarking on more live dates of which you find most listed below.

All music by Spring Offensive © 2012
www.springoffensive.co.uk