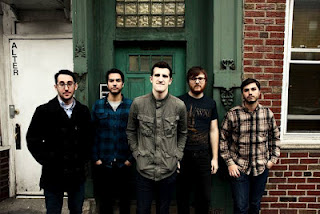 DAYTRADER TWELEVE YEARS OUT MAY 8th 2012 ON RISE RECORDS “FIREBREATHER” NOW STREAMING
Daytrader has been building an intense anticipation of their full-length album for more than a year now. Since releasing their EP ‘Last Days Of Rome’ in early 2011, they have built the buzz through the infectious tracks on the EP as well as their fantastic live show. The small amount of tracks on the EP left fans hungry for more and while it has taken time for a follow up, it wasn’t without good reason. The band, featuring ex-members of Crime In Stereo, Latterman and Divider comprises the best the Long island scene has to offer, so naturally they entered the studios with the patron saint of producers- Mike Sapone (Brand New, Taking Back Sunday, The Early November)

Daytrader writes hard-hitting, heartfelt songs in the vein of Jimmy Eat World, How Water Music, Saves The Day and Sunny Day Real Estate. Drawing from the best aspects of turn of the century pop, punk and emo, Daytrader crafts each song into an existing, unique experience. Their brand of sharp songwriting combined with Sapone’s fantastic production will leave you humming along, long after you’ve finished listening.

‘Firebreather’– the first song to be released from the record can be heard here: