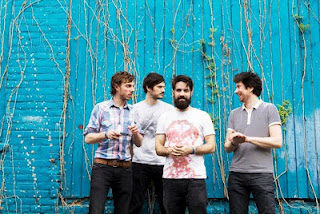 ‘Man Made’ is the latest single from Clock Opera, due for release on April 16th on Moshi Moshi/Island with their debut album ‘Ways To Forget’ released on April 23rd. It was one of the first songs to be written by the band and typifies the essence of Clock Opera – a complex, euphoric track with an infectious rhythm and profound emotion.

The initial inspiration for ‘Man Made’ was ‘Woman’s World’ by Graham Rawle, an incredible 450 page novel comprised of entirely cuttings from women’s magazines from the 1960’s, with the lyrics constructed by chopping up the words of a story about a Siberian women prison’s beauty pageant where the winner was granted parole, as recalled by the (now) old lady who won and was released.

Watch the video for ‘Man Made’-

It compliments the underlying theme of memory that runs throughout Clock Opera’s forthcoming self produced debut album ‘Ways To Forget’, the ten songs relate to the past, present and future, snapshots of life and experience and how these are shaped to some degree by our recollections and expectations that are altered over time, impacting on what is remembered – and consequently forgotten.
Clock Opera Headline UK Tour