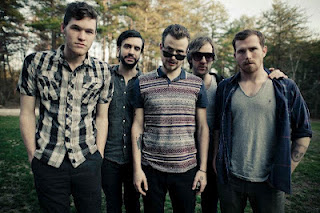 North Carolina’s Flagship is poised to break out at this year’s SXSW, where they will showcase new material in a series of performances that are sure to leave fans clamoring for more. Flagship will kick things off at the Bright Antenna showcase at Swan Dive on March 16 (9:00PM), headlined by Tom Morello. The five-piece band is the newest addition to Bright Antenna, home to such artists at OMD, The Wombats, Middle Class Rut and more. Helmed by the talented singer/song writer/guitarist Drake Margolnick, Flagship will release new single, “BackSeat” on iTunes this Spring. With Drake on lead vocals, his lyrics come to life with the help of lead guitarist Matt Padgett, keyboardist Grant Harding, drummer Michael Finster, and bassist Preston Hayden. American Songwriter has premiered the video for the song, watch it here. Flagship’s new material finds the band comfortably traversing varying territories ranging from the alternative folk tendencies of Grizzly Bear to the beautifully atmospheric swells of Sleeping At Last and Arcade Fire, and even to the frenzied passion of fellow southerners Colour Revolt. Flagship chronicles their daily life in a collaborative blog, Flagship Journal. The blog contains post from the band members including art, photographs taken by drummer Michael, poems, and drawings. Flagship at SXSW: 3.16 Swan Dive – Austin TX Flagship Online – Facebook – Flagship Journal