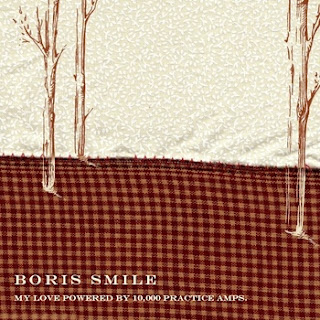 Boris Smile was formed in 2004 by A. Wesley Chung. While originally created as a solo project named after his young Russian neighbor, it quickly became a band with a rotating door of musicians. Boris Smile released their first full-length record entitled “Chapter I” in the summer of 2007. The album follows Chung’s personal experiences in high school, documenting the angst, self-doubt, and absurdity of youth.
During the final stages of “Chapter I,” the band began working on the next full-length record, a collection of lo-fi home recordings entitled “Young and it Feels So Good.” Chung produced, engineered, and mixed the 18 track record, recording almost all of it in his dining and living room. After six months of work, the album was released in the spring of 2008. “Young and it Feels so Good” is an exploration of youth culture that touches on four main themes of celebration, social separation, the “culture of cool”, and growth. The album was considered in the top ten best albums of 2008 by music blog The Album Project.
In the Fall of 2008, Boris Smile released the “Beartooth EP.” Produced by Chung and newest recruit Seth Shafer (tuba, keys, arrangements), “Beartooth” stands out as the darkest release in the Boris Smile catalog. The “Beartooth EP” was Boris Smile’s first release with Michigan indie label Count Your Lucky Stars Records. The EP stays true to the pop sensibilities of older Boris Smile while entering a moodier world of Chung’s writing, which is only enhanced by Shafer’s brooding arrangements.
Boris Smile released their “Rockets EP” in March 2010, to mostly positive reviews. The six-track album focuses on a central theme involving the exploration of space and the fears and wonders involved. The growth of the band is made quite clear in this album, from their most recent rendition of the Boris Smile classic “Adventures With Rockets” to the closing track “8.24.06 [The Humbling of a Planet].”
In the Spring of 2011, the band released their final album, “My Love Powered by 10,000 Practice Amps,” a 23 track magnum opus celebrating Chung’s 2009 experience of living at the L’Abri community in England. The album is characterized by an eclectic mix of songs and styles and revolves around the themes of community, faith/doubt, and strength in weakness.
With the prospects of marriage, moving, and graduations, the band decided to dismantle in the summer of 2011.
We celebrate the year since this great album release by re-streaming the release in its entirety. A must hear.
Tracklisting:
1. 10,000 Practice Amps
2. Lucy
3. The Battle of Miss Little
4. Into Town
5. Rumors
6. Council of the Brains
7. Mother Hen (Are You a Shelter?)
8. Queen of Green Welly
9. Heart of Gold
10. Fox and Amelia
11. Abajazz
12. Collecting My Thoughts
13. Living Water
14. Decisions and the Paralyzing Effects of Freedom
15. A Man Stands Alone
16. A Cake to Make Friends With
17. The Moment
18. The Death of Beartooth
19. War Canoes of Canada
20. You Are Loved
21. When Steven Walked on Water
22. Greatham is Great
23. The Egg of Mother Hen
Buy Album at www.cylsrecords.com

“…if I say yes, we are nobody. If I say no it can cost us our life”: The La Bufa Story with Guro Moe – Interview Special | Simon Gore