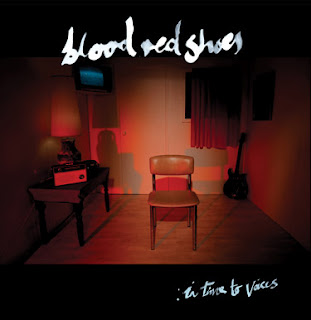 Brighton-based duo Laura-Mary Carter and Steven Ansell will return this year with their 3rd album ‘In Time To Voices’ out on March 26th and a new single ‘Cold’, released on March 19th via V2/Co-Operative Music. The band will also be hitting the road throughout the UK for an April and May tour. Since the release of their debut almost 4 years ago, the duo have embarked on a gruelling, unrelenting tour schedule, seeing them travel the four corners of the globe and earning them an international fanbase. However the life on the road can have its side-effects as Steven speaks of some of their more troublesome moments : ‘”From getting arrested after spending a night drinking in a biker den, Laura fighting bouncers….twice, to the two of us breaking up onstage or having a giant fight in Prague and me getting found in the street robbed by two prostitutes. Oh and there was that time where we were invited to a hotel demolition party in Paris where we broke into Keith Richards’ room and totalled it. These stories are all on the record. I guess being only two people spending more than 300 days a year together makes you kind of…volatile. Modern bands seem way too clean-cut and sensible to us anyway.“ The new album ‘In Time To Voices’, released March 26th was recorded at The Motor Museum in Liverpool, continuing their successful partnership with Mike Crossey (Arctic Monkeys/Foals/Tribes) who co-produced the album with them. The record sees Blood Red Shoes come of age musically, building on their punk rock roots and moving into an ambitious, three-dimensional new sound that encapsulates heavy rock as much as it does as sweeping, melancholy soundscapes and classic songwriting drawn from the likes of Black Sabbath, Fleetwood Mac, Led Zeppelin and The Rolling Stones. Laura-Mary, sheds some light on the new, ambitious approach taken this time around: ”With this album we totally threw out the rulebook of how we write and record. We decided we wanted to make a really ambitious record, not something which reflects our live show but something which is only limited by our imaginations and not by how many instruments we use onstage. We figured the best way to push ourselves forward was to write the best possible songs and melodies we could – once you have that as your foundation, you have the freedom to go anywhere with the sounds you use. We feel like a totally different band now. We feel like we’re shooting for the stars.” The first single ‘Cold’ to be taken from their forthcoming long-player, sees Blood Red Shoes unleash a their most bold and defiant track to date, with Laura-Mary’s confident vocal delivery set alongside a hyperactive drum groove and a truly anthemic chorus. On the track, Laura-Mary says: “Steven started playing this weird drum beat in a soundcheck and I wanted to make it into a song, so I found this mean riff to play over it. It has this hip-hop groove which is something we’d never tried before.”