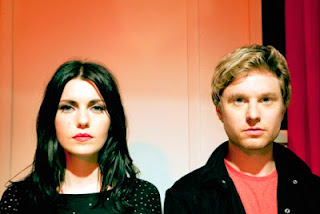 To follow up the release of their third album this week, Brighton based duo Laura-Mary Carter and Steven Ansell have announced details of their biggest UK show to date, playing the Shepherd’s Bush Empire on October 18th.

FULL UK TOUR!
This year sees the band back on the road with no signs of slowing down with a full worldwide tour planned and UK dates confirmed, detailed below:

The band’s third studio album ‘In Time To Voices’ is released on March 26th via V2/Co-Operative Music.

The new album was recorded at The Motor Museum in Liverpool, continuing their successful partnership with Mike Crossey (Arctic Monkeys/Foals/Tribes) who co-produced the album with them.

The record sees Blood Red Shoes come of age musically, building on their punk rock roots and moving into an ambitious, three-dimensional new sound that encapsulates heavy rock as much as it does as sweeping, melancholy soundscapes and classic songwriting drawn from the likes of Black Sabbath, Fleetwood Mac, Led Zeppelin and The Rolling Stones.

Laura-Mary, sheds some light on the new, ambitious approach taken this time around:

”With this album we totally threw out the rulebook of how we write and record. We decided we wanted to make a really ambitious record, not something which reflects our live show but something which is only limited by our imaginations and not by how many instruments we use onstage. We figured the best way to push ourselves forward was to write the best possible songs and melodies we could – once you have that as your foundation, you have the freedom to go anywhere with the sounds you use. We feel like a totally different band now. We feel like we’re shooting for the stars.

Larry and His Flask Set To Kick Off US Tour With Scott H. Biram‏