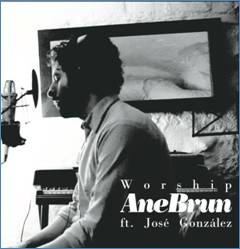 Norwegian born, Swedish based Ane Brun releases the second single WORSHIP from her recent, highly acclaimed album It All Starts With One on April 2nd 2012. WORSHIP is a duet with her fellow Gothenburg resident, José González, and is without a doubt one of the highlights of a record that has already reaped rewards across the globe, including a Norwegian Grammy (a ‘Spellemann Prisen’) for Best Female Artist – the second time she’s picked up the award – and a Manifest Award (Sweden’s independent equivalent to the Grammies). The album has already gone platinum in Sweden, and Brun has in addition been shortlisted for the 2012 Nordic Music Prize.A deeply moving but atmospheric slow burner, WORSHIP could be seen as a distant relative of Peter Gabriel’s classic ‘Don’t Give Up’, a song Brun sang repeatedly with the star throughout 2011’s New Blood tour after he invited her to join him on tour. The song is a concise plea to live in the present and leave a troubled past behind that sounds as though Brun wrote it especially for her Swedish-Argentine colleague, but it in fact had been “in the sketch box for two to three years”, Brun admits, “and I hadn’t really known what to do with it.” It was the album’s producer, Tobias Fröberg, who suggested González and, Brun recalls, “it took me not more than a second to realise that it was perfect, and that it would be a disaster if he would say no. Both me and Tobias know and respect José so much, and I’ve always wanted to sing with him. This song was perfect.” González, who in turn describes Brun as “one of my favourite folk artists”, leapt at the chance to perform with her. “The repetitive and eerie vibe fits my taste perfectly,” he says. “I really like how the song came out, and the album as a whole is awesome and beautiful. I feel proud to be part of it.”The single comes with a remix by Henrik Schwarz, the German deep house producer and DJ whose take on Brun’s ‘Headphone Silence’ in 2007 is still considered an Ibiza classic. His re-rub of WORSHIP exploits the original’s eastern-tinged strings while giving it a late night, euphoric makeover. The track is also accompanied by a new video made by Magnus Renfors. It represents the final chapter of the short film ONE, which is based on four songs from It All Starts With One, beginning with the first single from the album, ‘Do You Remember’. The film was premiered at the Gothenburg International Film Festival in January this year and is “an apocalyptical musical in four acts about a murder committed in the form of a show where everyone except the main character knows the ending…”Ane Brun and her band are set to play the following headline shows:· Dublin – Vicars Street – April 27th· London – Shepherd’s Bush Empire – April 28thTickets are now on sale in advance at http://www.ticketmaster.co.uk and www.gigantic.com.Ane has also confirmed Isle of Wright’s Bestival on 9 September and the WOMAD Festival.A deluxe edition of the ‘It All Starts With One’ with a bonus disc featuring original material and covers will be released in April 23rd.