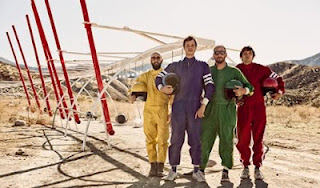 “Needing/Getting,” the new video from the GRAMMY-winning rock band OK Go, debuts today on MTV, VH1, MTV Hits, mtvU, Palladia and – in the UK – on MTV Music and MTV Rocks. MTV, MTV Hits and mtvU will play “Needing/Getting” every hour today, beginning at 6 a.m. A two-minute segment of the video premiered yesterday on NBC during the Super Bowl pregame program. It marked the first time that a band has premiered a video within a Super Bowl Sunday pregame show. The clip premiered simultaneously on MTV.com and VH1.com.
The “Needing/Getting” video is the result of yet another innovative partnership that OK Go has forged to push the creative boundaries of music and video, venturing into such disparate realms as science, photography, dance and now – in a collaboration with Chevrolet – automotive territory. Directed by Brian L. Perkins, who lensed the marching band version of OK Go’s “This Too Shall Pass” and Damian Kulash, Jr., the band’s lead vocalist, “Needing/Getting” was shot in the desert outside Los Angeles. A Chevy Sonic was outfitted with retractable pneumatic arms designed to play the 1,000+ instruments that OK Go set up along the two-mile course. The video took four months of preparation and four days to shoot. There are no ringers or stand-ins – Damian took stunt-driving lessons.
The band recorded this version of “Needing/Getting,” singing as they played the instrument array with the car, so it differs substantially from the version appearing on OK Go’s latest album, Of the Blue Colour of the Sky, which debuted in the Top 40 of The Billboard 200. Each piano had the lowest 2.5 octaves tuned to the same note so that they’d play the right note no matter where they were struck. Two hundred and eighty-eight guitars, graciously provided by Gretsch along with 67 amps, were stripped down to two strings, each tuned the same, and to the appropriate note. In some cases, wood blocks were used as capos to get notes higher than could be tuned. The tubas were played by driving along a fire hose filled with air and the bass line in the solo is played by balloons blowing through accordion reeds with white mega-phone-like horns attached to them. As the car pulled clips off the balloons, they blew. For more information and behind-the-scenes footage, see Let?s Do This | Chevy Sonic and OK Go | The Official Website of OK Go.
You can see the video streaming below-
“Needing/Getting” will be available later this month on iTunes, but you can check out the video now at:
Needing/Getting | OK Go | Music Video | MTV
“Needing/Getting” by OK Go | Music Video | VH1.com
OK Go | The Official Website of OK Go
“All Is Not Lost,” featuring OK Go with renowned modern dance troupe Pilobolus, has been nominated for a GRAMMY award for “Best Short Form Music Video.” The band took home a GRAMMY in this category in 2007 for “Here It Goes Again” (a.k.a. “the treadmill video”). “All Is Not Lost” was named 3-D Theater “Best In Show” out of a field of over 30 films at the 2012 Stereoscopic Displays And Applications Conference – the second consecutive year that an OK Go 3-D music video won this top honor.
OK Go recently teamed up with “Sesame Street” for “Three Primary Colors,” an educational vignette conceived and directed by Al Jarnow, a pioneering animator who won acclaim for numerous educational and experimental short films in the ’60s, ’70s, and ’80s for “Sesame Street,” “Electric Company” and other shows. Featuring a newly-penned OK Go song and the band’s colorful choreography, “Three Primary Colors” has attracted the notice of numerous media outlets, with LAist.com observing: “The beat will move you, the stop-motion animation (directed by Al Jarnow) will mesmerize you and we guarantee you’ll wish to be a kid (or in a band) again.” “Three Primary Colors” premiered on “Sesame Street” and at RollingStone.com last week. You can check it out at Sesame Street: OK Go – Three Primary Colors – YouTube or play the new “OK Go Color” game at Game Player – Sesame Street.