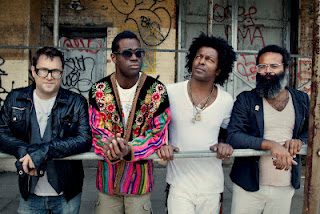 The “Nine Types of Light” film is now available for purchase. Get the DVD on Amazon or the digital long form video at iTunes.

The movie is meant to be an aesthetic re-imagining of the record, and includes a music video for every song on the album. The band personally asked their friends and the filmmakers they admired to help direct the music videos. Tunde Adebimpe, the director for the full “Nine Types of Light” movie, storybooked the music videos together with interviews from local New Yorkers on various topics, including dreams, love, fame and the future. Tunde also directed the music video for “Forgotten.”

If you haven’t seen the film yet, watch the trailer streaming below:

“Nine Types Of Light” Film nominated for a Grammy

“Nine Types of Light,” the amazing visual component to TV on The Radio’s acclaimed album Nine Types of Light is nominated for a GRAMMY for “Best Long Form Music Video.” Tune in this Sunday, February 12th at 8/7c to CBS to watch the awards.