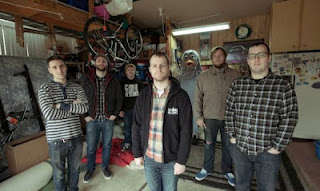 The Wonder Years’ already-scheduled headline date at the Kingston Peel on 23rd April sold out in a matter of days and the band have now announced a second date on 24th April at which they’ll be playing their 2011 album ‘Suburbia I’ve Given You All And Now I’m Nothing’ in its entirety. The album received plaudits aplenty and appeared on many an end of year list. 2011 also saw The Wonder Years complete a successful UK headline tour, as well as supporting Yellowcard and Saves The Day and being a part of the Kerrang! Tour. Vocalist Dan “Soupy” Campbell was also featured on the cover of Kerrang! in a special Pop Punk’s Not Dead issue. Soupy has the following to say about the forthcoming UK dates – “Banquet Records named our album, Suburbia I’ve Given You All and Now I’m Nothing, the best of 2011 and we were honored. Then, we sold out the show they’re hosting for us at The Peel in Kingston in under a week and were even more honored. Considering the sum of these two events, we couldn’t be more excited to announce that we’re going to be playing all of Suburbia I’ve Given You All and Now I’m Nothing at a special SECOND show at the Peel. These shows come as a result of our upcoming trip to the UK to play the famed Hit the Deck Festival in Nottingham with a lot of amazing bands and close friends. The fest is going to be amazing and we’re extremely excited to be a part of this year’s events!” Inspired in part by Allen Ginsberg’s 1956 poem “America,” The Wonder Years’ latest album Suburbia I’ve Given You All And Now I’m Nothing is an introspective, heartfelt, and honest journey that tells the story of a growing culture of people in America trying to find their place in the world without compromising the beliefs that make them who they are. LIVE DATES – Apr 22 Hit The Deck Festival Nottingham, United Kingdom Apr 23 The Peel Kingston, United Kingdom SOLD OUT Apr 24 The Peel Kingston, United Kingdom Special ‘Suburbia…’ show Apr 25 Glazart Paris, France Apr 26 Logo Hamburg, Germany Apr 27 Monster Bash Berlin, Germany Apr 28 Groezrock Festival Meerhout, Belgium