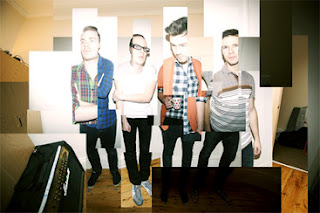 The Cast of Cheers release their debut single “Family” on February 20th on School Boy Error/Cooperative Music. The track has been championed by Zane Lowe (who played it twice in a row on his Radio 1 show), Fearn Cotton, John Kennedy, Huw Stephens and Edith Bowman to name a few.

“Family” is the first taster from The Cast of Cheers debut album proper, produced by Luke Smith (ex-Clor) and set for release in 2012.

The band has made a new remix of the single available as a free download. Get Family (Royal Scams Remix) for free here:

http://soundcloud.com/thecastofcheers/the-cast-of-cheers-family
Here is the video for “Family”, made up of 5,000 separate photographs and directed by Russell Weekes:

The Cast of Cheers have also announced they’ll be joining Blood Red Shoes on their UK Tour in April and May.

But before heading out with Blood Red Shoes, The Cast of Cheers will be hitting the road with Theme Park on a co-headline UK tour at the end of February. Full dates here: