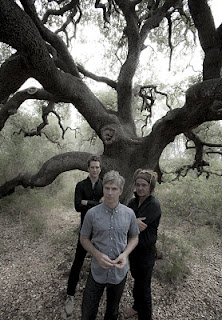 Nada Surf’s sixth studio album ‘The Stars are Indifferent to Astronomy’ was released last week through City Slang, showcasing their first set of new material in four years. Ahead of their UK shows next week (that include support from Van Pierzalowski’s band WATERS), the band have unveiled the video for the lead track from the record, 5:18 minute opus ‘When I Was Young’.

Watch the video for ‘When I Was Young’ here:

Charting a day in a life of a school-boy roaming the streets of New York City, ‘When I Was Young’ captures the idea of childhood innocence and idealism. Directed by Phil Harder, the video explores young love and freedom, and looks at the world in a way only a child can.

About to embark on a European tour, Nada Surf will be coming to the UK for two shows next week, supported by label-mates WATERS:
FEBRUARY

I Call Fives To Release ‘Someone That’s Not You’ 7" On MARCH 20; Band To Play w/ All Time Low March 1 And To Headline 5 Shows on the Pure Noise Records Tour‏ [News]