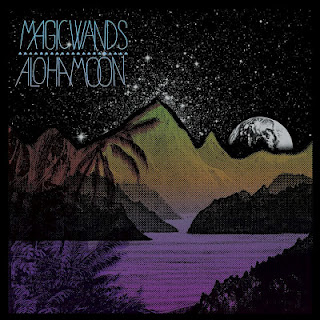 Up and coming indie duo Magic Wands will release their anticipated full-length debut, Aloha Moon, on April 24 via Bright Antenna/ILG. Early praise comes from SPIN, who declares their first single “Space” “…a sexy and propulsive stunner.” The band will make several appearances at SXSW prior to kicking off a tour. Stay tuned for details.

Magic Wands first garnered attention with the release of a noteworthy EP, Magic Love & Dreams, which quickly drew praise from publications like Nylon who applauded their “sparkling, psychedelic-pop gems.” The band honed their live chops, solidifying their fanbase touring alongside The Kills, The Horrors, The Raconteurs, The Black Keys, The Virgins, Black Kids and The Teenagers, as well as appearances at SXSW and Lollapalooza.

Their debut full-length, Aloha Moon, is a cosmic dance through a universe where voices echo, keyboards shimmer and guitars splash like giant waves on a distant planet’s shores. Having ambiguously dubbed their sound “lovewave,” each track is distinctly different yet all share the common theme of spaced-out tropical dreams, which isn’t surprising when one considers the disparate locations where Aloha Moon was made: San Francisco Bay, a cabin in Echo Park and under the stars of the Palm Desert at night. Some of the tracks on Aloha Moon were mixed by acclaimed producer Dave Sardy (LCD Soundsystem).

2012 promises the release of Aloha Moon worldwide via Bright Antenna Records as well as more tours of the US and abroad with a full live band. Look for Magic Wands at SxSW this year performing on Thursday, March 15th.

Here is what the press said about Magic Wands:

” ‘Space’ is the first single from the band’s debut full-length, Aloha Moon, and it’s a sexy and propulsive stunner. Dexy and Chris Valentine build an atmospheric and cutting guitar soundscape that beautifully foreground’s the former’s compellingly stoic vocal. It’s just a really cool song, suggestive of the darker side of ’80s pop and brighter side of falling in love.” – SPIN

“It’s the classic story: Boy meets girl on MySpace; girl gives boy a luminescent heart lamp; boy and girl start a band and score opening slots for the Kills and the Horrors. Magic Wands is Chris and Dexy Valentine, a husband and wife to-be who make sparkling, psychedelic-pop gems with names like ‘Teenage Love’ and ‘Kaleidoscope Hearts’.” – Nylon

A special message from Magic Wands.

Hollow Earth Signs with Panic Records; ‘We Are Not Humanity’ to Be Released April 17th [News]