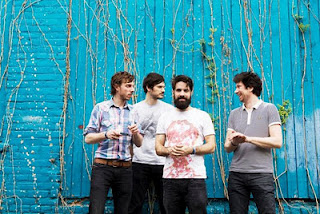 Producer, remixer and Clock Opera mastermind Guy Connelly seeks out his musical building blocks in the most unlikely places. A World War II ammunition case slams on a car park floor; a bouncing basketball thuds in a reverberant school hall; shoes squeak on a squash court. Tin cans, pots and pans, hand fans, old springs and other things of metal. Lighters, glass, cocktail flasks, trains that pass, harps in bits, guitars from skips, woodwind, brass, everything made slow and fast.

Words sometimes go through a similar process. The lyrics of ‘Man Made’ for instance were formed by the deconstructing and reassembling of a 20p women’s magazine story about a beauty pageant in a Siberian prison, whereby the winner was granted parole.

Guy also employs these techniques in his widely acclaimed remixes for the likes of Feist, Metronomy, Everything Everything and The Drums.

But for ‘Ways To Forget’ this process is just the beginning. Che Albrighton (drums / samples), Dan Armstrong (keys / vocals / samples) and Andy West (guitar / bass) enter the fray and transform the disparate industrial elements into songs filled with euphoria and urgency by immersing them in warmth and humanity.

The universal emotion that holds all this together derives from faded memories and the inability to prevent change (‘Once And for all’, ’11th Hour’), periods of transition and our future selves (‘Move To The Mountains’, ‘Fail Better‘), the intensity of the present moment (‘White Noise‘), the limitations of emotional baggage (‘Belongings‘), dependence (‘A Piece Of String‘) and perception (‘Lesson No. 7‘).

Clock Opera’s debut album is full of romance and recollections, re-enactments and speculations, memory and mystery, machine generated mood and human thought. Chopped and sliced, reassembled and repeated, these songs hold a mirror to the times we are living in.

‘Ways To Forget’ is the sound of human emotion in an age of machines.

In support of their debut album release of ‘WAYS TO FORGET’, Clock Opera will also embark on their first headline tour of the UK.