Announcing “The Seeing Clearly Tour” featuring: Everyone Dies in Utah, Legacy, Call Us Forgotten. The tour will kick off January 25th in Houston, TX and will travel the west coast of the United States finishing up on Feb. 15th in Little Rock, AK (dates and cities listed below).

About the Bands:
Everyone Dies In Utah:

This will be EDIU’s last tour in support of their Tragic Hero Records release “Seeing Clearly”. Immediately following the tour, the band will be going into the studio to begin recording their second full length album due out Spring/Summer 2012. If you want to catch the amazing songs which you know and love from “Seeing Clearly” and that have propelled EDIU to their current state, this is the tour not to miss!

Newly signed InVogue Records artists Legacy are on the rise. This will be a rare opportunity to catch the band on the west coast as well as a chance to preview songs from their upcoming debut IVR release. Come and see what all of the buzz is about!
Call Us Forgotten:

Hailing from Portland, Oregon, CUF’s sound is a force to be reckoned with. The band has quickly gained international recognition, and consistently reigns at the #1 Spot on MySpace’s “Unsigned” Metal Charts and in the Top 5 “Overall” Metal Charts. With heartfelt lyrics, brutal instrumentals, epic choruses and catchy clean vocal melodies, CUF dynamically constructs songs that will sear their signature on your bones. 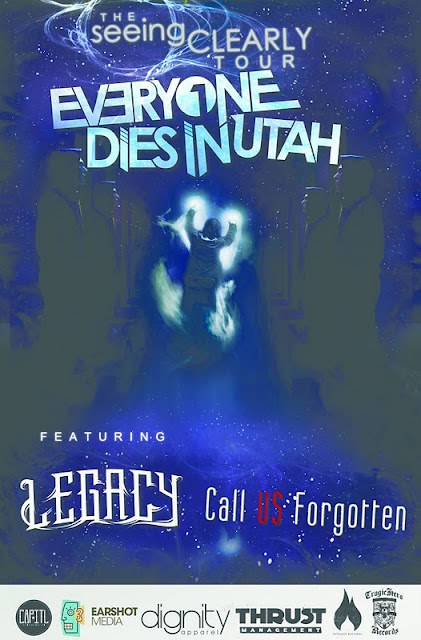